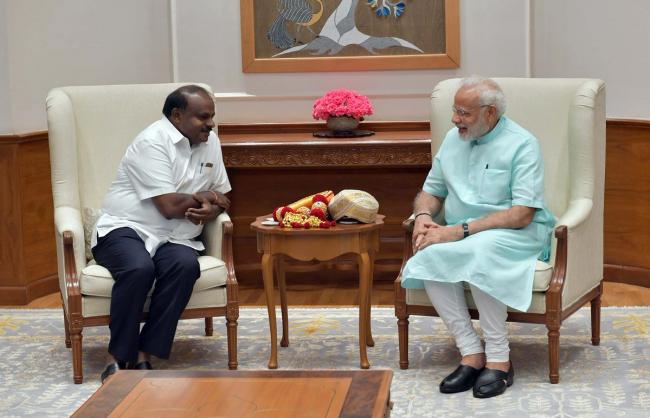 New Delhi, May 28 (IBNS): For the first time after swearing-in as the Karnataka Chief Minister, HD Kumaraswamy met with Prime Minister Narendra Modi in the national capital on Monday.

The meeting took place four days after Kumaraswamy took oath as the CM in a complete show of opposition unity.

Kumaraswamy's party Janata Dal (Secular) had tied up with the Congress to form the Karnataka government.

The Congress and the JD(S) formed the government after a week-long political drama, which occurred after the Karnataka polls results.

While the Karnataka people gave a fractured mandate, the Bharatiya Janata Party (BJP), which emerged as a single largest party with 104 seats, was invited to form the government by Governor Vajubhai Vala amid controversy.

However, the Congress and the JD(S) combine claimed to have the simple majority (113) with the support of 117 lawmakers.

The political tussle reached the judiciary with the Congress-JD(S) moving the Supreme Court to stall BJP's strongman BS Yeddyurappa's swearing-in as the CM.

Though the swearing-in ceremony could not be stopped, the top court slashed the 15-day period, which was given by the Governor to the BJP to prove majority, to little more than 24 hours.

Even before the floor test began, Yeddyurappa  resigned as the BJP failed to secure a simple majority. With two seats yet to be polled, BJP would have required the support of 111 MLAs for the time being to form the state government.