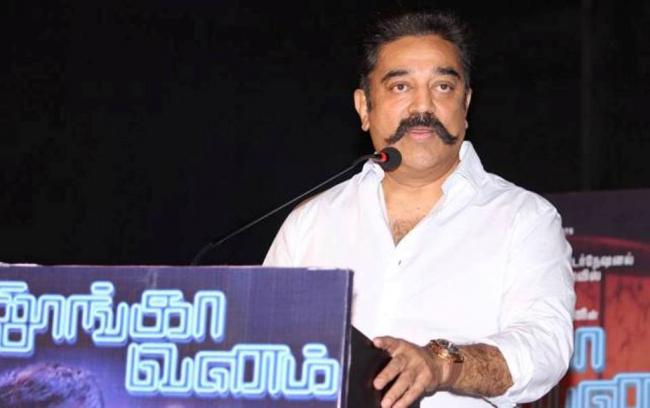 Chennai, Feb 16 (IBNS): Tamil actor Kamal Haasan, on Friday, expressed shock at the reduction in Tamil Nadu's share of the water and said he is going to seek more details about the actual judgement passed by the Supreme Court of India, according to media reports.

"I am also shocked at the reduction in the supply of water. I have to get more details about the actual judgement but I think Supreme Court firmly said that water can’t be owned by any state. That’s a consoling factor," the Hindustan Times quoted Haasan as saying.

The Supreme Court, on Friday, ordered an increase in water share for Karnataka while delivering a judgement on the Cauvery river dispute, media reports said.

Delivering the verdict, the three judge bench, which included Chief Justice Dipak Misra, observed that the river water must be shared by all states and it does not belong to any particular state.

The sharing of waters has been a contentious issue between Tamil Nadu and Karnataka since 1892, with the debate growing stronger in 1924 between the erstwhile Madras Presidency and Kingdom of Mysore.

The Cauvery, which flows through Karnataka and Tamil Nadu, is the third largest river -- after Godavari and Krishna -- in south india and is considered the lifeline of Tamil Nadu and Southern Karnataka.

The central government had set up a tribunal- CWDT or Cauvery Water Dispute Tribunal- in 1990 to deal with the dispute.

In Feb 2007, the tribunal delivered its final verdict and allocated 419 tmc of water annually to Tamil Nadu and 284.75 tmc to Karnataka; 30 tmc of  water to Kerala and 7 tmc to Puducherry.

Karnataka was ordered to release 177.25 tmc of water to Tamil Nadu in a normal year from June to May.

However, all four states filed review petitions and the dispute continued.

While in 2013, the central government had notified the final award the dispute lingered. Last year in Sep, the Supreme Court reserved its judgement on the CWDT’s final award.