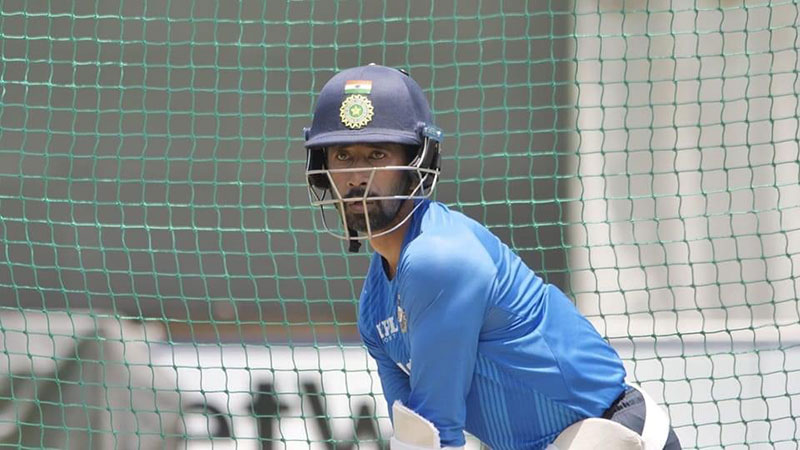 Kolkata/IBNS: Amid a new controversy centering around the Indian cricket, Cricket Association of Bengal (CAB) secretary Snehasis Ganguly has opined veteran wicketkeeper-batsman Wriddhiman Saha shouldn't have made his personal conversation over his place in the national side with chief selector Chetan Sharma or BCCI president Sourav Ganguly public, media reports said.

Speaking to reports, Ganguly, who is also the elder brother of Sourav Ganguly, said, "This is my personal opinion, but what was communicated to him (Saha) by the chief selector/BCCI was private.

"He probably shouldn’t have gone public with that. Also, he could have played the Ranji Trophy. He cited personal reasons for pulling out and we have to respect that. The door is always open for him, whenever he wants to join the squad."

After he was not picked in the team for the upcoming Test series against Sri Lanka, Saha claimed Sourav Ganguly had confirmed his position in the national side after the wicketkeeper-batsman played a match-saving unbeaten 61 against New Zealand.

"After scoring 61 against New Zealand at Kanpur, Dadi (Sourav Ganguly) congratulated me over WhatsApp and mentioned, ‘As long as I’m here (helming the BCCI), you would be in the team’. Such a message from the BCCI president really boosted my confidence. What I’m struggling to understand is how things have changed so fast," Saha said in an interview.

Quite contrary to Sourav Ganguly's alleged assurance, Saha said he was told by chief selector Chetan Sharma that the team management was looking for someone fresh.

Saha even said Indian head coach Rahul Dravid, who is extremely close to Sourav Ganguly, had suggested his retirement.

Sticking to his conversation with Saha, the head coach said that the senior wicket-keeper "deserved honesty and clarity" as the management is looking to groom a younger gloveman with Rishabh Pant having established himself as the number one choice.

"I've deep respect for Wriddhi and his contribution to Indian cricket. My conversation came for that respect. I think he deserved honesty and clarity. I didn't want him to know about it from the media," Dravid said at a virtual press conference.

"I don't expect players to agree with me in all aspects but that doesn't mean you brush it under the carpet. I truly believe in having such hard conversations. I'm not hurt by it. It's natural for players to get upset and get hurt.

"With Rishabh Pant having established as the number one keeper, we were looking to groom a younger keeper. The incident doesn't change my respect for Wriddhi," added Dravid.

The development came days after former Indian skipper Virat Kohli had contradicted with Sourav Ganguly, who claimed he had personally requested the right-handed batsman not to step down as the T20 captain.

However, Chetan Sharma later backed Ganguly claiming all selectors had requested Kohli not to step down as the skipper.