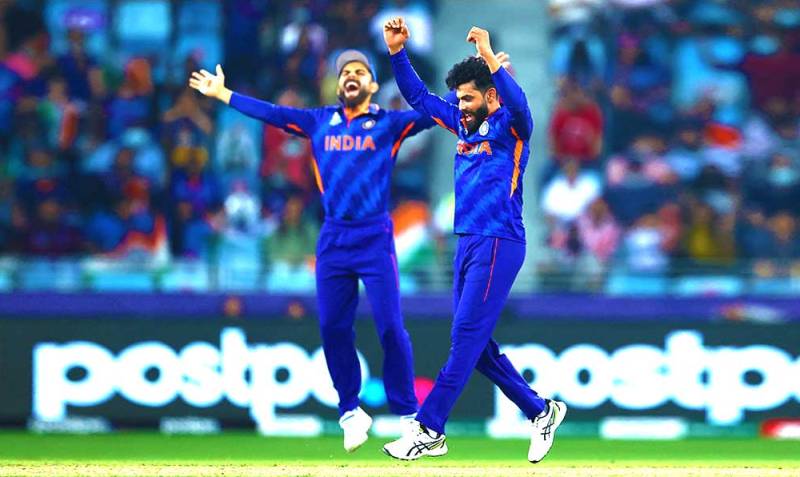 India skittle out Scotland for 85, eye to chase down in 7.1 over to better Afghanistan's NRR

Dubai/UNI: Needing a big win, the Indian bowlers have set up the stage for another one, after folding Scotland for a paltry 85, here on Friday.

After skittling out Scotland, India will be looking to chase down 86 runs in 8.5 overs to go past New Zealand's NRR and in 7.1 overs to race past Afghanistan's NRR. India's current NRR is 0.07 and New Zealand's is 1.27.

Hardly anything was there in offer for Scotland to cherish about. George Munsey (24) played some exquisite shots, but other than that they could not do much as the Indian bowlers regularly gave marching orders to the Scottish batters.

Both Indian pacers and spinners exploited the conditions exceedingly well. Ravindra Jadeja was the pick of the lot, although Mohammad Shami's late burst was too hot for Scotland.

Jasprit Bumrah and Ravichandran Ashwin had been on mark picking three wickets between them.

It was Virat Kohli's birthday and was lucky to have called the toss right for a change after losing it on many occasions. Mindful of the dew factor and the job of improving the NRR to keep their hopes alive in the tournament, India decided to chase.

Varun Chakravarthy returned as India's third spinner in place of Shardul Thakur and did his job pretty well. He conceded 15 runs in three overs.

India started well after Jasprit Bumrah unleashed a slower ball to take out Kyle Coetzer in the powerplay, but conceded a six to George Musey, sending a strong signal about his intent.

In the seventh over though, Jadeja cleaned up Richie Berrington and then trapped Matthew Cross LBW, leaving Scotland 29 for 4.

The Indian bowlers have been excellent, hardly giving any room for the Scottish batsmen. The spinners have been even more fantastic. The rival batsmen were at sea with Varun's variations and Jadeja's spinning abilities.

Jadeja was so good that Scotland were only able to make six of his 24 balls. He picked up three wickets for 15 runs.

Shami, on the other end, was in a hurry to finish it off. He bowled Calum MacLeod off the pad, then Safyaan Sharif was run-out. Alasdair Evans was his last scalp after yorking him at the roots.

Other two wickets were taken by Bumrah (2) and Ravichandran Ashwin (1).