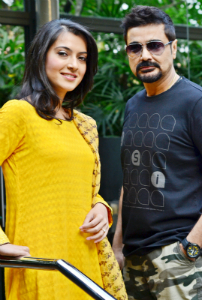 Speaking at the press conference on Friday, Prosenjit said, “The idea of the film was in my mind from a very long time and I was eagerly looking for a proper time. With this film I will again be able to reach to those audience who are not only from the urban sector but also belong to the rural sector. My fans eagerly wait for an action film of mine, and with this film I am surely fulfilling their wish."

He said: "This is not only a complete action package film, but also a film where lots of sentiments are attached. This will be my first film with the renowned director Raja Chanda and I am really very excited about it. This is the first Bengali film venture by Zee Essel Vission.  Another thing that I would like to add here is that me and Arpita are again working together after quite a long time."

Overwhelmed to be directing the star Prosenjit, Director Raja Chanda said, “Firstly I can’t resist myself to say- my dream has come true that I am really making a film with Prosenjit Chatterjee and I promise to my viewers that Force will be a complete commercial film with hi-class action and emotions which will definitely touch the heart of all ages of the viewers.”