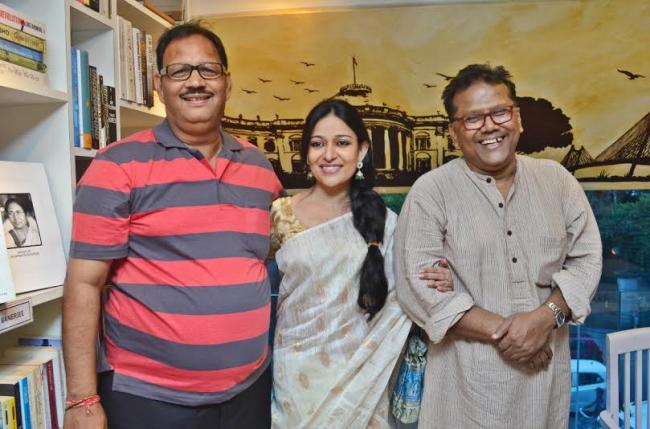 India Blooms News Service | | 23 May 2015, 05:46 pm
#Tollywood filmmaker re-adapts Tagore work in 80s backdrop, # Rabindranth Tagore for the Tollywood Kolkata, # Suman Ghosh Kadambari
Kolkata, May 23 (IBNS) It is a season of going back to the life and works of Bengal's all time cultural bellwether Rabindranth Tagore for the Tollywood film industry to draw celluloid inspiration.

So films on the works by Tagore or drawn from chapters in his life are talk of the town, the latest two such being Suman Ghosh's Kadambari and Sekhar Das's Jogajog.

Rabindranath Tagore had worked hard to give finishing touches to 'Jogajog' for its theatrical version in association with 'Natyacharjo' Pt Sisir Kumar Bhaduri, years after penning the novel which had been initially christened as 'Tin Purush'.

Talking to IBNS during the premier of the film Jogajog recently, a re-adapttion with the 80s backdrop, director Sekhar Das said, "Tagore's Jogajog was given total theatrical shape years after the novel was penned in 1929 (Asharh 1336).

"With great labour and effort, the poet-dramatist-novelist-visionary chiselled the proper beginning and end of the tale and implored Sisir Bhaduri  to 'do whatever you like," Das recalled about the work which was first serialised in 'Bichitra' magazine before coming out in book form.

In the first two issues the novel was titled Tin Purush. In the third issue in Bengali month 'Ogrohayon' 1334, Rabindranath changed the name to Jogajog.

"We have retained the essence and spirit of the original work, went by the drama version but only re-adapted the story in a more contemporary milieu, of the 80s, Das, having directed award winners like Mohulbanir Sereng and Kaler Rakhal said.

Jogajog, which deals with the issue of subjugation of women and marital rape in feudal set-up, has several acclaimed actors from minister-actor Bratya Basu to national awardee Ananya Chatterjee and debutant in feature film  Subholagna Mukherjee (in the role of Kumudini)..

"I enact a feudal baron in the film," Bratya said.

"My portrayal as the brother of Kumudini doesnot deviate from the original characterisation of Tagore. I also get to sing a Tagore number," actor Arjun Chakraborty said.