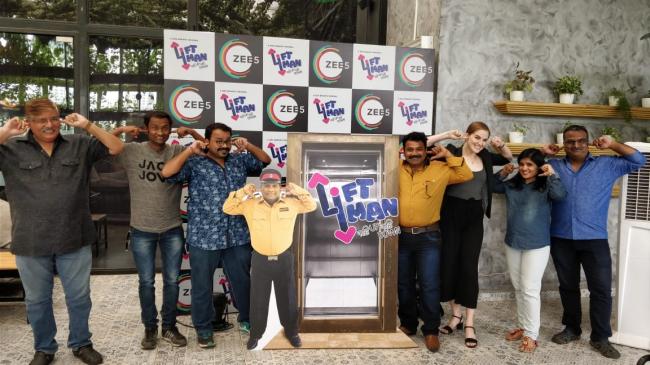 With Bhalchandra (Bhau) Kadam of Chala Hawa Yeu Dya fame in the titular role, the series that launched on Thursday promises a laugh-riot delivered in unique Bhau style.

Shot almost entirely in the lift, the series introduces a range of different personalities who encounter Bhau and his quirky sense of humour on their ‘journey’ up and down.

To add to that, can you imagine a situation where the lift breaks down and you are stuck inside with him? With Bhau’s comic timing, expect a roaringly hilarious time.

Widely lauded for his coming roles he has played thus far, Bhau Kadam is a hot favourite among those who count humour among their preferred genres. Liftman uses a relatable setting to delve deeper into the psyche of people and showcase how different people react to situations.

Commenting on the show launch, Bhalchandra (Bhau) Kadam said, “The concept of Liftman is such a phenomenal one and I am thrilled about the new avenues of media such as ZEE5 that naturally render themselves to such innovative formats. This series marks my web debut in a titular role, and I couldn’t have chosen a better concept for the same. With smartphones becoming such a common feature, entertainment options with the audience is gradually changing. Today, literally everything is at one’s fingertips – and in such cases how can one be left behind?”

Manish Aggarwal, Business Head - ZEE5 India commented, “The Marathi-speaking audience has an evolved sense of entertainment as may be evident from our rich heritage of theatre and cinema. With humour on the go, rich concept, relatable characters, and well-known artists from the space – Liftman has it all. Bhau Kadam in many ways is synonymous with comedy today in the Marathi industry, and I am glad that he chose to play the Liftman in our short 8-10 minute snackable comedy web series.”

Liftman is a web series of 10 episodes running in a short duration of 8-10 minutes taking the audience on a humorous lift ride of one liners & jokes.