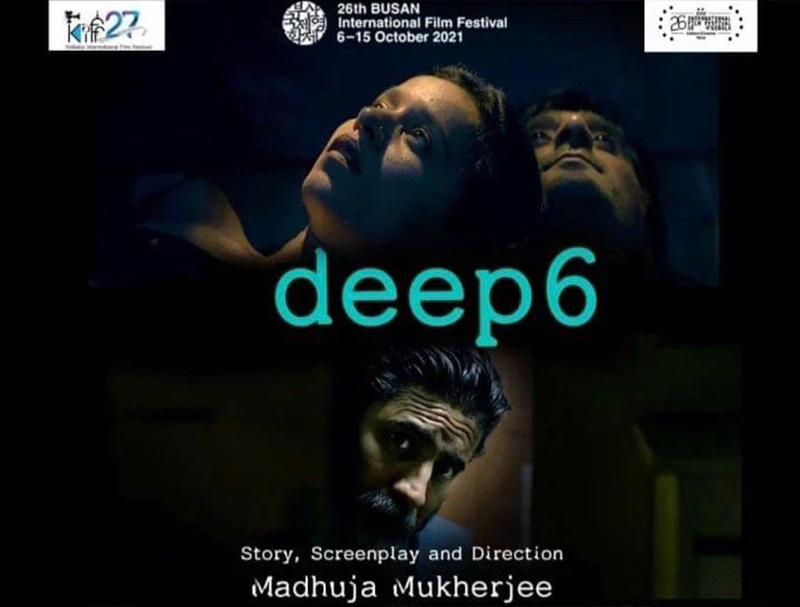 Deep 6 is the first full-length feature film directed by Madhuja Mukherjee who, despite her young years, wears many hats. She is a filmmaker, a prize-winning author, a known researcher and Professor of Film Studies at Jadavpur University, Kolkata.

Her maiden short film Carnival, screened at many festivals, drew a somewhat mixed response because of its non-linear, abstract treatment though technically, it was brilliant.

In Deep 6, screened at the 27th KIFF, she chooses a linear story but blends it with magic realism, surrealistic touches and the confrontation between Life and Death as experienced by her sole protagonist, Mithul (Tilottama Shome.)

Mithul is a journalist, not ambitious, an introvert, hardly affected by the death of her grandmother (Maya Ghosh), and has broken up with her boyfriend Arko (Chandan Roy Sanyal). She might perhaps be read as an entirely non-ambitious young woman who lives life on her own terms and makes no bones about this.

The film's strength is its technical brilliance. Mukherjee had done the production design herself in addition to directing the film. Deep 6 plays around with the characters who come back from the dead. At the other end of the scale is Arko, the lover who refuses to cut off ties with the girlfriend who broke off with him long ago.

The strange amalgam of live characters interplaying with the live ones creates an alternative world for Mithul, creating for the audience, a hallucinatory feeling alongside physically real.

Avik Mukhopadhyay, the cinematographer, ideally played around with light and darkness,  muted colours, the dim lighting of narrow gullies and heavily crowded bazaars, public buses, while Prabudha Banerjee matched this with his low-key, mood-centric music.

The opening frame showing the  body of the grandmother being readied for the last journey is brilliant because the old woman comes back to watch television soon after she is dead.

Funnily, this return of her father, grandmother and brother from the dead neither scares Mithul nor surprises her but their nagging keeps annoying her as freedom is the most important reality of her life.

The sole problem that keeps gnawing at you is the inordinate length of the film funded by significant names like Shoojit Sircar, Ronnie Lahiri, Avik Mukhopadhayay, Harcharan Singh.

But freedom or no freedom, she is still burdened down with womanly chores like marketing, chopping and cleaning vegetables and fish, and cooking. But she appears to love doing these and “The Great Indian Kitchen” can go to hell!

(Review by Shoma A. Chatterji)