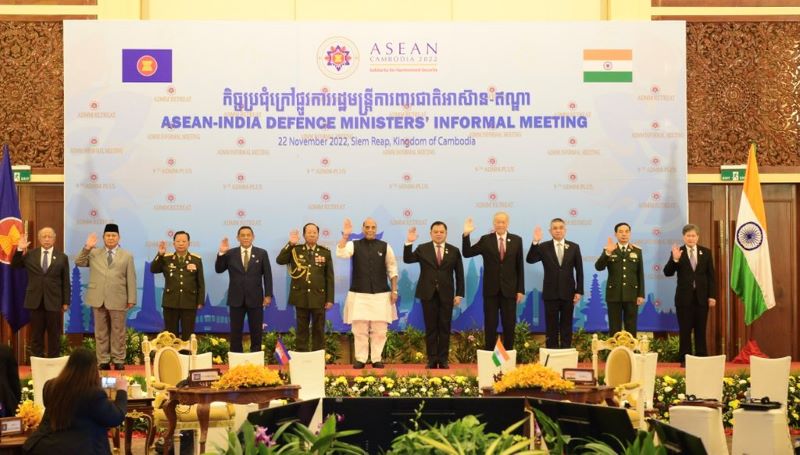 Siem Reap/UNI: Defence Minister Rajnath Singh on Wednesday called for urgent and resolute global efforts to counter transnational and cross-border terrorism, terming it as the gravest threat to regional and global security.

Addressing the ADMM Plus forum, Singh said, "The gravest threat requiring urgent and resolute intervention by international community is transnational and cross-border terrorism. 'Indifference' can no longer be a response, as terrorism has found victims globally."

He pointed out that the global security environment has transformed fundamentally over the last few decades, with terrorist groups creating interlinkages across continents backed by new-age technologies to propagate ideologies, transfer money and recruit supporters.

The transformation of cyber-crimes into organized cyber-attacks point to the increasing use of new technologies, by both State and non-State actors," he said.

The minister also drew the attention of the forum to the other security concerns that have emerged in the aftermath of the global Covid-19 pandemic, including challenges of Energy and Food Security.

He stated that as a responsible member of the international community, India has worked with its partners, in extending humanitarian aid, medicines, vaccines and food grains on a large scale.

"If there was ever a time to look at the collective solutions borne from the path of dialogue and diplomacy, it is now," he added.

The minister also asserted that India advocates a free, open and inclusive Indo-Pacific region and calls for peaceful resolution of disputes while respecting the sovereignty and territorial integrity of all nations.

"We are concerned about complicating actions and incidents that have eroded trust and confidence, and undermined peace and stability in the region," he said.

Singh said that India stands for the freedom of navigation and overflight, unimpeded lawful commerce, peaceful settlement of maritime disputes and adherence to international law, particularly, the United Nations Convention on the Law of the Sea (UNCLOS) 1982.

"We hope that the ongoing negotiations on the Code of Conduct on the South China Sea will be fully consistent with international law, in particular, UNCLOS, and should not prejudice the legitimate rights and interests of nations that are not party to these discussions," he added.

Singh said that regional security initiatives must be consultative and development oriented and should reflect the larger consensus.

The year 2022 also marks the 30th Anniversary of India-ASEAN relations.

Defence Secretary Giridhar Aramane, Chief of Integrated Defence Staff to the Chairman, Chiefs of Staff Committee (CISC) Air Marshal BR Krishna and other senior officials of the Ministry of Defence and Ministry of External Affairs accompanied the Minister.