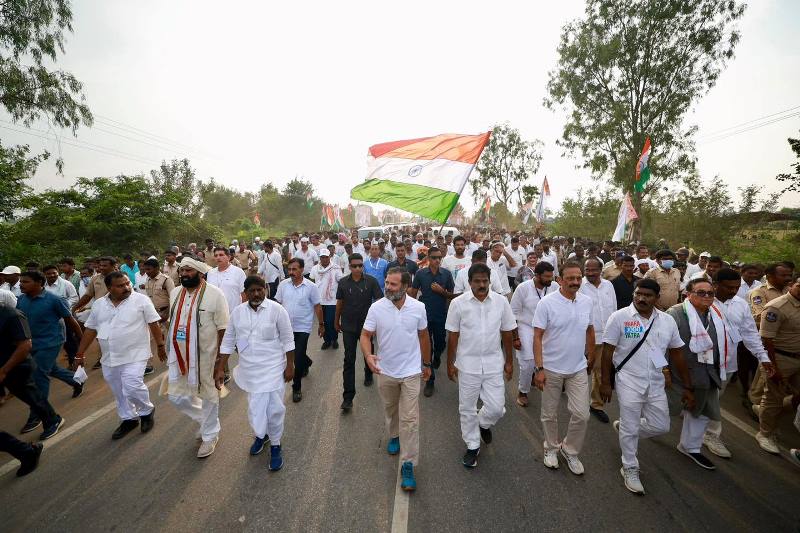 Hyderabad/UNI: Congress leader Rahul Gandhi on Friday promised that the GST on handloom products would be scrapped after the Congress party comes to power at the Centre in the next elections.

He also assured that all Girijans, cultivating forest lands for decades, would be given ownership rights by implementing the Forest Rights Act, of 2006.

Gandhi gave these assurances during his interaction with the handloom weavers and Girijans as part of the Bharat Jodo Yatra, which entered the third day in Telangana on Friday.

Briefing the media persons after the meetings, Congress MP & former TPCC Chief Capt. N. Uttam Kumar Reddy, along with AICC General Secretary Jairam Ramesh, CLP Leader Bhatti Vikramarka and others, informed that Gandhi had a detailed interaction with the weavers and Girijans facing the Podu lands issue in the state.

"Rahul Gandhi gave specific assurance to the weavers that 5 per cent of GST on handloom products would be scrapped," he said.

He pointed out that when the BJP Government imposed 5 per cent GST on handloom products including Khadi handloom, handicrafts, mats, pots and ploughs, from 1st July 2017, Chief Minister K. Chandrashekhar Rao (known as KCR) was among the first, even before the BJP Chief Ministers, to ratify GST Act in the Assembly.

The Congress MP has also assured the creation of a mechanism for the economic empowerment of weavers by enabling easy loans and other facilities, he said.

"Rahul Gandhi also assured that the next Congress Government will take all measures to resolve the problems and hardship being faced by the weavers of Telangana," he said.

The Congress MP said that the TRS Govt did not give ownership rights to a single Girijan in the last eight years. Instead, it snatched away 18,655 Acres of forest land from 1,950 Girijans.

Uttam said that Rahul Gandhi, during his stay in Telangana till Nov 7, would interact with various sections of the society on their problems.