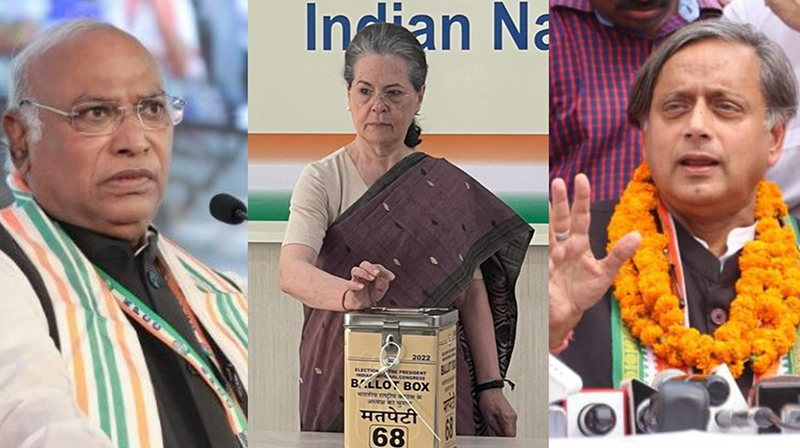 New Delhi/IBNS/UNI: The Congress presidential elections between two senior MPs outside the Gandhi family, Mallikarjun Kharge and Shashi Tharoor, are underway Monday as the country's oldest and prime opposition party is aiming to refurbish its organisation, eight years after being uprooted from power by the Bharatiya Janata Party (BJP).

The voting started around 10 am, and will end at 4 pm.

A special polling booth has been created in a container at the site of Bharat Jodo Yatra in Sanganakallu.

A photograph of the polling booth was shared by Congress general secretary communication Jairam Ramesh.

Kharge cast his vote at the Karnataka Pradesh Congress Committee headquarter in Bengaluru.

While Kharge is said to be the choice of the Gandhi family, both interim president Sonia Gandhi and top leader Rahul Gandhi have said that they are not backing any candidate.

Tharoor at a recent press conference said there were systematic flaws in the Congress presidential election process, even as he clarified he was not suggesting it was intentional.

On the eve of the election, he said he is batting on a track with an "uneven bounce" and doesn't want "pitch tampering".

On Sunday, Kharge joined the Bharat Jodo Yatra which is in Karnataka presently.

Sonia Gandhi, who took charge of the party after Rahul stepped down in 2019 post Lok Sabha poll debacle, has cast her vote.

The interim chief was accompanied by her daughter and Congress general secretary Priyanka Gandhi Vadra.

Rahul and former Prime Minister Dr. Manmohan Singh too have cast their votes.

The result of the presidential polls will be declared on Oct 19.