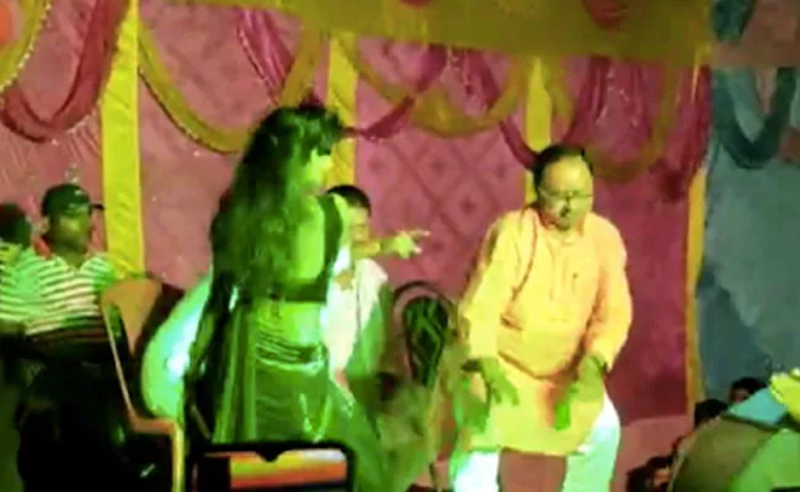 Patna: After an MLA from Bihar Chief Minister Nitish Kumar's party JD(U) was caught on camera giving a flying kiss and throwing cash while dancing with a young woman at a wedding reception, the party has asked him to "behave" and "maintain the dignity" of his post.

In the video, Bhagalpur MLA, Gopal Mandal was seen lifting his kurta and holding the hands of the woman, who was hired as an entertainer at the event, reports said.

Mandals antics were captured when he was attending a wedding reception at Fatehpur village in the Bhagalpur district of Bihar.

At first, he was seated on the stage but got up later to dance with the woman. Soon two other men who were seated alongside him also joined.

Gopal Mondal, who drew flak and was reprimanded by his party, blamed his act on his intense passion for dancing.

He said that on an earlier occasion, Chief Minister Nitish Kumar had asked him why he danced in the public, to which he had replied that he felt an uncontrollable urge to do so whenever he heard music.

"No one can stop an artiste from dancing," he said he had told the Chief Minister.

However, the party has not taken the incident lightly and JD(U) Bihar Unit President Umesh Kushwaha has asked the lawmaker to "behave and maintain the dignity of the chair".

Last February, Mandal had made a public spectacle of himself when he danced to the Bollywood hit 'Dilliwali Girlfriend' at a wedding reception.

The JD(U) leader had also drawn criticism for walking around in his underwear during a train journey.

He had, however, brushed aside negative remarks saying he was suffering from an upset stomach and had to rip off his kurta pajama as he felt a sudden urge to rush to the toilet.