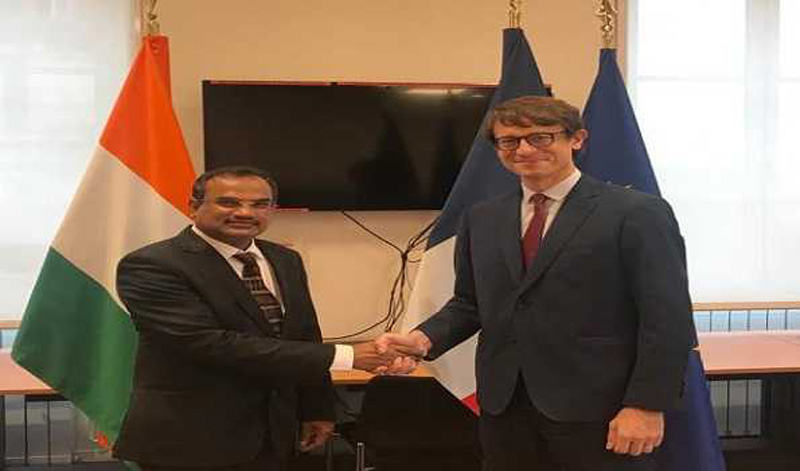 India, France stress on need to act against terror networks

Paris/New Delhi/UNI: India and France held the 15th Meeting of their Joint Working Group on Counter Terrorism in Paris during which they emphasised the need for taking concerted action against all terrorist networks, including the al-Qaida and ISIS/Daesh, as well as the Pakistan-based terror outfits LeT, JeM, and Hizb-ul Mujahideen.

The talks were led by Mahaveer Singhvi, Joint Secretary (Counter Terrorism) at the Indian Ministry of External Affairs, and Philippe Bertoux, Director for Strategic Affairs, Security and Disarmament at the French Ministry for Europe and Foreign Affairs.

The two led their respective inter-Agency delegations that comprised of senior officials and experts to discuss the ongoing counter-terrorism cooperation, as a corner stone of the strategic partnership between the two countries, particularly in the Indo-Pacific region.

Held in a month that marks both the thirteen-year-anniversary of the November 2008 attacks in Bombay and the six-year-anniversary of the November 2015 attacks in Paris, this meeting allowed France and India to express solidarity vis à vis all the victims, reaffirm their unequivocal condemnation of terrorism in all its forms and manifestations including cross border terrorism, and share their resolve to stand together in the common fight against global terrorism, an official statement said.

Both sides stressed the need for all countries to ensure that territories that are under their control cannot be used to plan, launch terrorist attack against any other country, shelter or train terrorist fighters.

They exchanged views on threats posed by UN sanctioned terrorist entities and individuals and emphasized the need for taking concerted action against all terrorist networks including al-Qa’ida and ISIS/Daesh, as well as Lashkar e-Tayyiba (LeT), Jaish-e-Mohammad (JeM), and Hizb-ul Mujahideen etc, including making sure that perpetrators of terrorist attacks are systematically and expeditiously brought to justice.

The two sides also exchanged views on proscription of terrorist individuals and entities as one of the tools to combat terrorism. Both sides shared information about their priorities and procedures for pursuing sanctions and designations against terrorist entities and individuals.

The two sides shared their assessment of the evolution of the terrorist threat on their respective territories and in their regional environment and also underlined the need to ensure that Afghan territory does not become a source of radicalization and terrorism, regionally or globally and is never again used to threaten or attack any country or to shelter, recruit or train terrorists, or to plan or finance terrorist attacks in accordance with the UNSC Resolution 2593, that was adopted under India’s presidency on August 30, 2021.

Both sides exchanged views on various areas of cooperation in the sphere of counter-terrorism, countering illegal narcotic drugs and arms smuggling, and expressed their will to keep sharing information on countering radicalization and violent extremism, combating financing of terrorism, preventing misuse of the internet for terrorist or violent extremist purpose, acting against internationally designated entities and individuals.

Both sides committed to working closely together to respond to these challenges and discussed ways to deepen engagement between their respective counterpart agencies to further advance cooperation in the sphere of counter-terrorism.

The two sides also discussed counter-terrorism cooperation in multilateral fora including in the UN, building-up upon India’s membership of the Security Council for the 2021-2022 biennium, and the FATF and ways to further enhance this cooperation.

They recalled their willingness to coordinate actively in view of the preparation of the third edition of the "No Money for Terror” international Conference to be organized by the Government of India.

The two sides decided that the next meeting of the Joint Working Group on Counter-Terrorism shall be held in India in 2022 on a mutually convenient date.

The talks come days after National Security Advisor Ajit Doval was in Paris to hold talks as part of the annual India-France Strategic Dialogue on Nov 5.

During Doval’s visit, the two sides held talks on the developments in the Indo-Pacific region, the Afghan situation, terrorism and emerging threats in the maritime, cyber and space domains among other issues, and agreed on the need for closer partnership, including in the