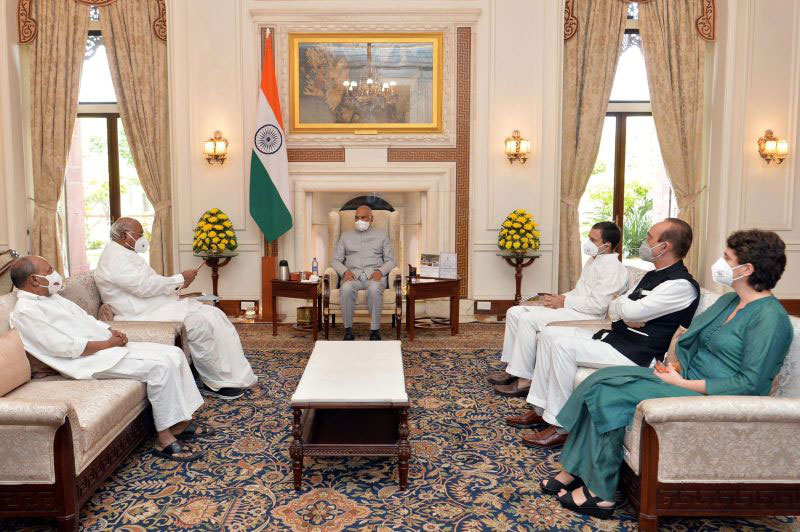 New Delhi/UNI: A delegation of Congress leaders led by Rahul Gandhi and Priyanka Gandhi Vadra met President Ram Nath Kovind on Wednesday and demanded sacking of Minister of State for Home Ajay Mishra, whose son is alleged to have been involved in the killing of farmers in the Lakhimpur Kheri violence incident.

They demanded a judicial probe and submitted a memorandum demanding the removal of the union minister mentioning in detail the Lakhimpur Kheri incident.

After the meeting, Rahul Gandhi told the media that they sought justice for the families of the farmers and a journalist who died in the incident.

"We met the families of those who were crushed to death in Lakhimpur. They said they wanted justice, they wanted the guilty to be punished. They also said that the father of the accused is the home minister, as long as he is a minister, a fair probe cannot be done. We conveyed this to the President," Rahul Gandhi said.

Congress General Secretary Priyanka Gandhi said the President assured them he would talk to the government on the matter.

"The families of Lakhimpur victims believe an impartial probe is not possible till the minister is sacked. This is the demand of every right-minded person in this country," Priyanka Gandhi said.

"He assured us he would discuss the matter with the government today," she said.

She also attacked the government and said the message being sent out by not sacking the minister was that there is "no justice for the poor" and "law does not apply to ministers".

"It is the government's responsibility to listen to people, this is not our demand as Congress party, it is the demand of the people," she added.

Four farmers and a journalist were killed in Lakhimpur Kheri on Oct 3, when cars from the convoy of MoS Ajay Mishra ran over the farmers who were returning from a protest against the minister's visit.

Ashish Mishra, the minister's son, was alleged to have been involved in the incident as he was in one of the cars. He was named in the FIR and eventually arrested by the Uttar Pradesh police.

Four people from the convoy were also killed in the incident, after the farmers allegedly beat them up.