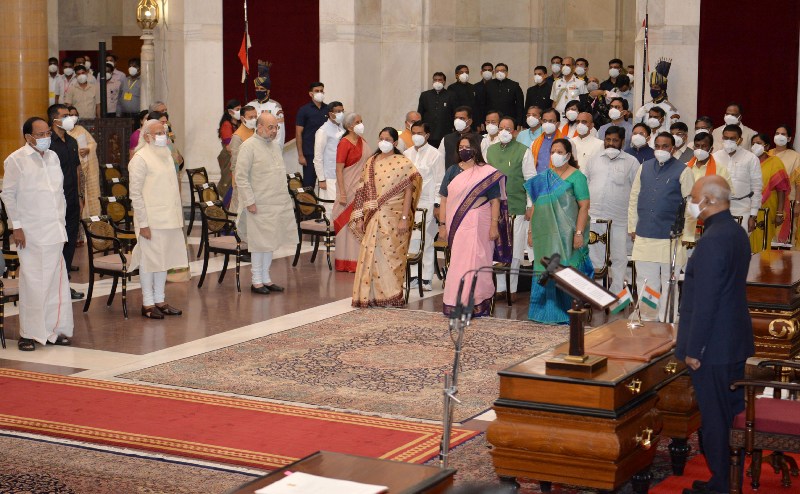 PM Modi cabinet reshuffle: Check out who's got what

New Delhi/IBNS: With 43 new ministers being inducted in the Narendra Modi government as part of a major Union Cabinet reshuffle on Wednesday, several important portfolios got new faces including health, law, Information and Technology as well as railways.

In a reboot on Wednesday, Mansukh Mandaviya has been given the charge of the crucial health ministry. Additionally, he would retain the Ministry of Chemical Fertilizers.

Of the old portfolio holders, Harsh Vardhan was sacked as the health minister following the second wave of Covid which engulfed the nation, exposing its inadequate health infrastructure.

Ashwani Vashnav has been shouldered with the charge of Railways and IT ministry.

What came as a shock was the resignation of Ravi Shankar Prasad as Minister for Law and Electronics and IT, who has been seen to be in the core team of the government's troubleshooters.

Kiren Rijiju has been helmed as the minister of law ministry.

Sixteen months after joining the Bharatiya Janata Party (BJP), Jyotiraditya Scindia on Wednesday took oath as minister in the Narendra Modi government 2.0. He has been given charge of the Civil aviation ministry, which was once handled by his father Madhavrao Scindia.

The Information and Broadcasting Ministry went to Anurag Singh Thakur. Additionally, he will handle the Youth Affairs and Sports ministry.

Rajya Sabha MP Dharmendra Pradhan, who has been handling the petroleum ministry, will now handle the education and skill development portfolio. Piyush Goyal, who, too, is a member of the upper house, will handle the textile ministry.

Meenakshi Lekhi was made the Minister of State in External Affairs and the Culture Ministry.

Hardeep Singh Puri will be the Minister of Petroleum and Natural Gas besides Housing and Urban Affairs.

Pashupati Paras has been given the Food Processing portfolio.

In a major reshuffle of the PM Narendra Modi-led Cabinet, 43 new ministers took oath on Wednesday.

President Ram Nath Kovind administered the oath of office at a ceremony held in the Rashtrapati Bhavan.

Several young leaders were added to the new team that will be led by Modi.

PM Modi now has 77 ministers, with nearly half of them new. Anurag Thakur and Hardeep Puri are among 15 new cabinet ministers.

This is PM Modi's first and major reshuffle of the Union Cabinet since he took office for a second term in 2019.