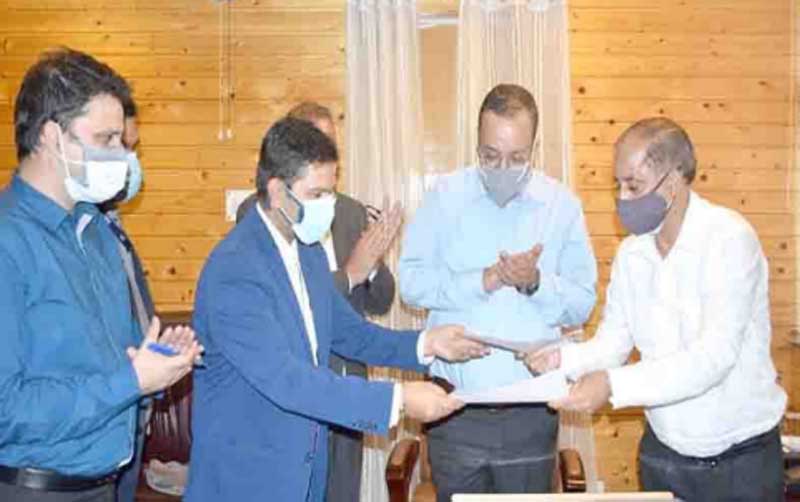 Srinagar/IBNS: In a significant decision, the Jammu and Kashmir Horticulture Department, today signed a Memorandum of Understanding (MoU) with airline carrier Go-Airlines for transportation of perishable horticulture and agricultural produce to various destinations across the country.

The MoU was signed in presence of Principal Secretary Agriculture and Farmers Welfare and Horticulture departments, Navin Kumar Choudhary at the Civil Secretariat here today.

Speaking on the occasion, the Principal Secretary said that this significant step will empower the fruit growers of Jammu and Kashmir and will increase their income as well as boost the rural economy.

He added that it will also address the transportation hiccups for the horticulture produce especially the highly perishable items like cherry, plum, and apricots among the rest.

Navin further added that the government is also considering providing some sort of financial support to fruit growers who will utilize this facility for the transportation of horticulture and agricultural yield outside J&K, as well as the facility of refrigerated vans for which the decision could be taken by the government in a couple of days.

Under this MoU, the airline will charge Rs. 24, Rs. 34, Rs. 47, Rs 48 and Rs 50 for transportation of perishable fruit produce from Jammu and Srinagar to Delhi, Mumbai, Pune, Chennai, Kolkata and Bangalore respectively.

The growers can directly approach the airline and transport their produce at the said rates.

Pertinently, the government had invited bids from airlines regarding this and the Go Airlines was selected as it offered the lowest rates per/kg for transportation of perishable fruit produce.