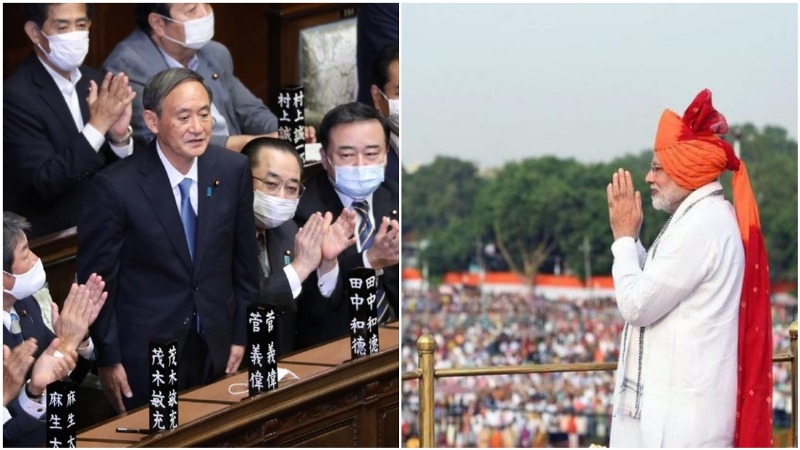 Suga relayed Tokyo's worries about Beijing's "intensifying unilateral attempts to change the status quo" in the East and South China seas, including the recent introduction of a law allowing its coast guard to use weapons against ships it views as intruding into its territory, according to the Foreign Ministry as quoted by Kyodo news agency.

Beijing is embroiled in a number of territorial disputes, including in the East China Sea over the Japanese-administered Senkaku Islands, which it claims and calls Diaoyu. It has also continued the militarization of artificial islands in the disputed South China Sea despite an international ruling in 2016 against its claims, the news agency reported.

As per the Ministry of External Affairs released statement, the two leaders also discussed the ongoing COVID-19 crisis.

The disease is believed to have originated from China.

" The two leaders discussed the COVID-19 situation in the respective country and exchanged views on various regional and global challenges posed by the pandemic," the MEA said in a statement.

"They highlighted the importance of close India-Japan cooperation to overcome these challenges, such as by working together to create resilient, diversified and trustworthy supply chains, ensuring reliable supply of critical materials and technologies, and developing new partnerships in manufacturing and skill development. In this context, the two leaders emphasized the need for early operationalization of the Specified Skilled workers (SSW) agreement in order to synergize their strengths and achieve mutually beneficial outcomes," it said.

"They also highlighted the Mumbai-Ahmedabad High Speed Rail (MAHSR) project as a shining example of their cooperation and welcomed the steady progress in its execution," the statement said.