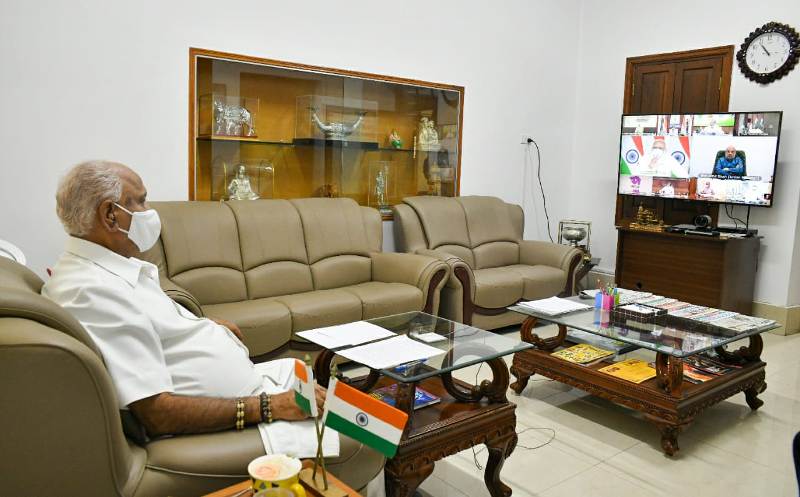 BS Yediyurappa demands 1,471 tonnes of oxygen for Karnataka at meet with PM Modi

Bengaluru/UNI: Karnataka Chief Minister B S Yediyurappa on Friday told Prime Minister Narendra Modi that he was concerned with the shortage of oxygen in hospitals in the state amid an exponential rise in coronavirus infections and demanded a supply of 1471 tonnes of oxygen.

During a video conference with the Prime Minister, he said several healthcare facilities in Karnataka will face closure if the shortage of oxygen is not addressed.

''The usage of oxygen is going up day by day. Yesterday itself, the state used up 500 tonnes of oxygen. The Centre has supplied only 300 tonnes to the state. If the same situation continues, then several healthcare facilities will have to be closed,'' he added.

He urged the Prime Minister to ensure ''immediately supply'' of oxygen to overcome the shortage faced at present.

The Chief Minister also pointed out that the state's positivity rate has risen to 16 per cent. ''Bengaluru city is the worst-affected with high cases being reported from Tumakuru, Ballari, Mysuru, Hassan and Kalaburagi districts.''

Karnataka urged the Centre to ensure that states are treated equally while distributing the vaccines.

According to Yediyurappa, infrastructure at government hospitals was alright now.

''Steps were taken to develop infrastructure in the last six months.We're also getting private hospitals to give the government 50 per cent of their beds," he informed the PM.

He told Modi that the State government had permitted private hospitals to tie up with nearby hotels to start 'step-down' hospitals. ''We are also thinking of starting field hospitals that have ICU facilities,'' he added.

On the Remdesivir shortage, the Chief Minister said Karnataka needed two lakh doses for the next ten days.