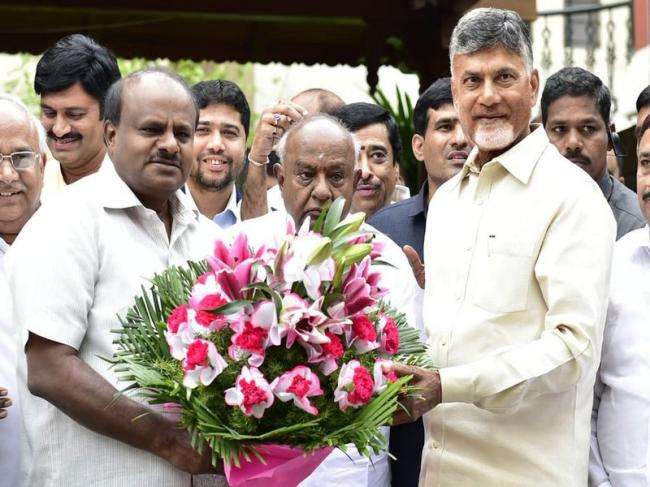 Naidu along with two top JD(S) leaders- Gowda and his son Kumaraswamy- agreed that the need of the hour is to form a united Opposition to "save the country's constitutions" from the BJP.

All the three veteran politicians said the question of who will become the Prime Minister if the united Opposition comes to power in the upcoming Lok Sabha elections, which will be held in few months' time, can be taken later.

Claiming an imminent victory of the united Opposition in the next year, Kumaraswamy even went on to say that 2019 will witness the same political story of 1996, when Gowda became the Prime Minister after the United Front was voted to power.

AP CM @ncbn visited our house in Bengaluru. We discussed about current political developments of the Nation.@hd_kumaraswamy pic.twitter.com/7E5oVhXBm4

However, Gowda remained the Prime Minister for just one year.

Days ago, Naidu, who is one of the strong proponents of a united Opposition, met Congress president Rahul Gandhi and vowed to work together both at the state and central levels.

The Congress and Naidu's Telegu Desam Party (TDP) are contesting the upcoming Telangana Assembly elections together.

Though the two political outfits were earlier opposed to one another, Rahul has decided to bury their past to oust the saffron party in 2019 Lok Sabha elections.

The BJP's terms with TDP worsened after the latter withdrew its support from the central government over the issue of special status for Andhra Pradesh.

After the central government refused to grant a special status to the southern state, the TDP broke up with the BJP at the Centre.

Naidu had earlier met West Bengal Chief Minister Mamata Banerjee, who has been opposing the BJP for last few years, over the Opposition's unity.

Interestingly, Naidu and Mamata had earlier spoke about working together to strengthen the regional political parties.