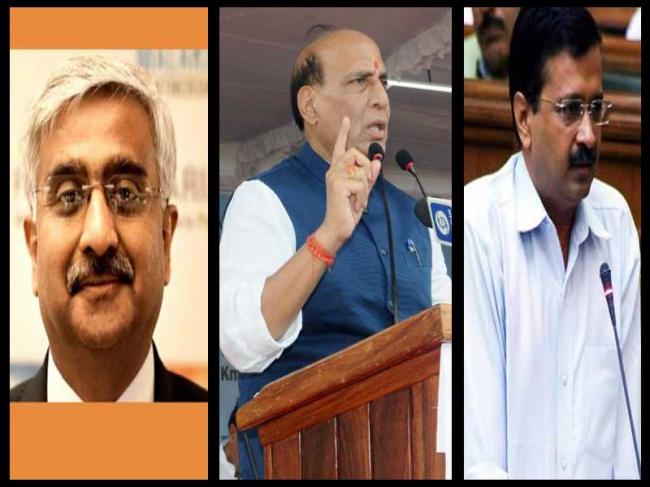 Singh took to Twitter to condemn the alleged assault of the Chief Secretary of Delhi government by two Delhi MLAs.

Singh said the civil servants should be allowed to work without any interference.

Singh's first tweet reads, "I am deeply pained by the happenings involving the Chief Secretary of the Delhi Government. The civil servants should be allowed to work with dignity and without fear".

I am deeply pained by the happenings involving the Chief Secretary of the Delhi Government. The civil servants should be allowed to work with dignity and without fear.

The MHA has sought a report on the incident from the Lieutenant Governor of Delhi. Justice will be done. A delegation of IAS DANICS & Subordinate Services of Delhi Government met me today and apprised me of the prevailing situation.

The tussle between Delhi's Aam Aadmi Party Government and its officials turned uglier  signalling a complex and murky  political slugfest on the offing as a ruling party MLA on Tuesday lodged an FIR against Chief Secretary Anshu Prakash allegedly for using casteist remakrs against him, hours after the top bureaucrat claimed that he was assaulted by two ruling party legislators.

According to reports, AAP MLA Ajay Dutt, in his FIR, has alleged that the Chief Secretary had made casteist remaks against him at a meeting on Monday. This was the meeting where the Chief Secretary was claimed to have been assaulted by AAP legislators

Meanwhile the IAS officers' Association, met the Delhi Lieutenant Governor and expressed its concern over the alleged attack on the Chief Secretary.

Manisha Saxena, Secretary of  the Association,  said, "Met LG & put forward our concerns. Chief Secy was called for a meeting late at night; CM, Dy CM & MLAs were there, when CS reached he was roughed up. Since few years such things have been happening, officers have been insulted & humiliated."

Meanwhile, police reached the Delhi secretariat after another AAP MLA  Ashish Khaitan  called the Police Control Room, alleging he was manhandled at the secretariat.
"There was a mob, unruly and aggressive - they ran towards me shouting pro-BJP slogans ..my staff members have been hurt. Lodged a complaint with Daryaganj PS....Delhi police staff did not intervene," Khetan said.

A section of Government officers have gone on a strike in protest against the alleged attack on the Chief Secretary, making the situation more chaotic.

Delhi Administrative Subordinate Services President DN Singh announced a strike with immediate effect and said they will not go to work until those guilty are arrested.

The AAP said it will hold a press conference in the afternoon regarding the incident.

Earlier, the Chief Secretary had claimed that  he was manhandled and abused at Chief Minister Arvind Kejriwal's home by two lawmakers of the ruling Aam Aadmi Party (AAP) late on Monday night.

NDTV has quoted the  top bureaucrat as alleging that  he was attacked in the presence of Kejriwal after being summoned for discussions on Aadhaar-related problems.

Prakash reportedly went straight to Lieutenant Governor Anil Baijal's residence to complain about "misconduct and abuse" by the lawmakers, including Amanatullah Khan, a controversial politician who has been in trouble with the law in the past.

NDTV quoted the officer as saying that he was "held by his collar" and shouted at by  Khan.

CM Kejriwal’s office has, however, denied reports of assault and said the Chief Secretary is acting at the behest of the BJP.

The said MLAs have also denied the allegation. Reports also say that Delhi IAS association in the national capital is meeting the Lieutenant Governor in this regard and they are also mulling to file an FIR

Condemning the alleged assault Delhi Congress chief Ajay Maken tweeted :  “Kejriwal should apologise for this hooliganism which took place before him. AAP Govt is unable to deliver-Beating of Chief Secretary by MLAs in front of CM is another low & is aimed to divert attention from Govt failures! AAP does not know Governance and has failed miserably."

In a statement, the AAP said, “About 2.5 lakh families were deprived of rations last month due to faulty implementation of Aadhar. The MLAs were under tremendous pressure from the public. There was a meeting of MLAs at CM residence. Chief Secretary refused to answer questions saying he wasn’t answerable to MLAs and CM and that he was answerable only to the L-G. He used bad language against some MLAs and left without answering any questions. Now he’s making ludicrous allegations.”