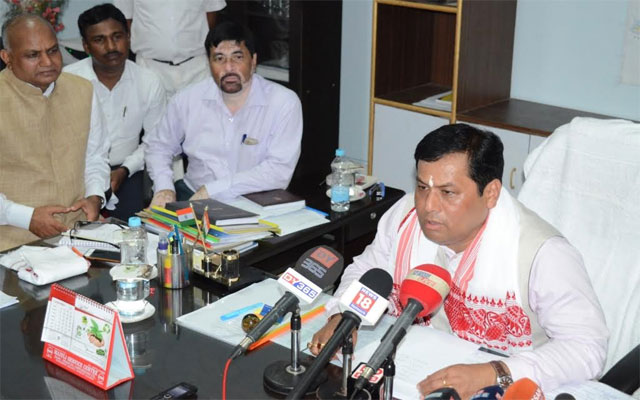 Sonowal said that he has tremendous faith on the young, capable and highly qualified civil officers and they must work in earnest to bring change to the government system in an interaction programme with the Assam Civil Service Officers from 2013 to 2015 batch at Assam Administrative Staff College Khanapara on Saturday.

While admitting that there are lot of challenges and resource crunch at the grassroots level, Sonowal said that the Civil Service Officers must perform and try to thrive in difficult conditions for the betterment of the people.

Rather than complaining about limited resources, the officers must try to be agents of change and ensure swift service delivery to the people.

The Assam CM reiterated that unless the poorest of the poor in the remotest corner of the state do not get the benefit of government services then the Officers cannot consider themselves successful.
Sonowal said that on many occasions people have complained about the corruption in the government system and slow nature of work at government offices.

The Assam CM called on the Civil Service Officers to set an example of dedication towards one’s duty and remove corrupt practices totally from the system.

"Right from the grassroots an efficient and punctual work culture should be built and for that Civil Service Officers must set examples for others to follow," the Assam CM said.

Sonowal said that the grassroots institutions like Panchayats must be strengthened and Civil Service Officers have a great role to play in that.

He urged the officers to work sincerely for the benefit of the people without becoming arrogant and they must ensure that the common people’s grievances are redressed with humility and sincerity.

The Assam CM said that even as a Chief Minster he faces the challenge of living upto the expectation of the people and he cannot consider himself successful unless he delivers on their expectations.

"The Civil Service Officers must be respectful towards their subordinate staff and try to build a close relationship with their surrounding community for effective management of law and order situations. They must also ensure a clean environment at their office campuses and they should plant trees for making Swach Bharat a reality," Sonowal said.