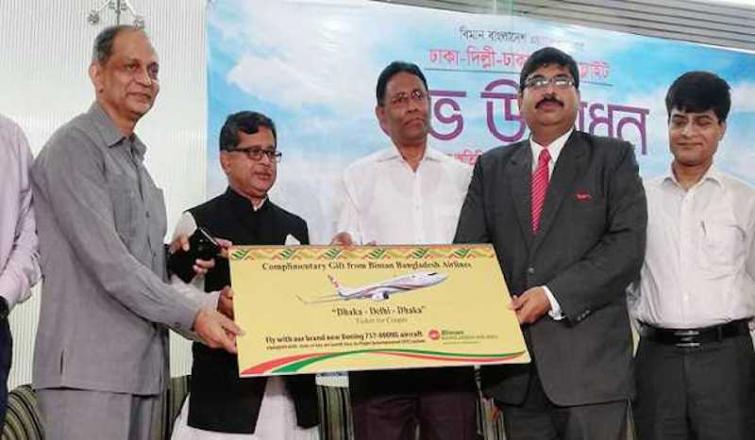 The first Biman Bangladesh flight on this route landed at Indira Gandhi International Airport this afternoon while Bangladesh High Commissioner to India Syed Muazzem Ali received the arriving passengers through flowers at terminal-3 of the airport at 1720 hrs (local time).

A spectacular gate was decorated by using water cannon to welcome the 150 arriving and receiving the 87 departing passengers. A cake was cut on the gate premises to mark the occasion.

The passengers including some in wheel chairs expressed their satisfaction after travelling by Biman’s Dhaka-Delhi direct flight saying that it would immensely reduce their sufferings which they had to face while travelling via Kolkata.

Earlier in Dhaka, state minister for civil aviation and tourism M. Mahbub Ali inaugurated the flight before it took off from Hazrat Shahjalal International Airport at 1500 hrs.

Ali hoped that Biman would be able to make profit form Dhaka-Delhi direct flight as the national flag carrier is now the lone airline on this route.

He said the government is committed to turn the national flag carrier into a profitable venture through providing standard on time service to the passengers.

Biman suspended its direct flight operation on Dhaka-Delhi route in September, 2014 citing aircraft shortage in its fleet although the decision irked the Bangladeshi passengers as several lakh people from the country travel to India every year for medical, business and tourism purposes.

Biman Bangladesh Airlines has initially decided to operate three flights (Monday, Thursday and Saturday) in a week on its Dhaka-Delhi route by its 162-seat Boeing 737-800.

The round-trip fare in the route is approximately Taka 24,000 in Economic Class and Taka 65,000 in Business class. The ticket price of Biman is much lesser compared to Jet Airways, the only airline which operated Dhaka-Delhi Direct flights till recently.

The cash-strapped Jet Airways recently was forced to ground all its aircraft.