Paris, Feb 28 (IBNS)  Chairman and CEO of The Walt Disney Company Robert A. Iger on Wednesday announced plans for a 2 billion euro, multi-year expansion for Disneyland® Paris alongside French President Emmanuel Macron at the Palais de l'Elysée in Paris.

The new development will include a transformation of the Walt Disney Studios Park, adding three new areas that are based on Marvel, Frozen and Star Wars, along with multiple new attractions and live entertainment experiences.

The expansion plan is one of the most ambitious development projects at Disneyland® Paris since its opening in 1992 and underscores the Company's commitment to the long-term success of the resort as Disney's brand beacon in Europe.

"We're very excited about the future of Disneyland® Paris and continue to invest in its long-term success," said Robert A. Iger, chairman and chief executive officer of The Walt Disney Company.

"The resort is already the leading tourist destination in Europe, and the transformative expansion we announced today will add even more of our beloved characters and unparalleled storytelling to create new lands, attractions and entertainment that further elevate the guest experience and drive new opportunities for tourism in this dynamic region."

The new areas will infuse some of Disney's most popular stories and characters into this unique destination, building upon the success of the resort's 25th Anniversary celebration and continuing to enhance the guest experience for millions of Europeans.

With over 320 million visits since 1992 and representing 6.2 percent of France's tourism income, Disneyland® Paris has played a key leadership role in tourism for the region. The resort continues to be a powerful driver of economic and social development with over 16,000 employees representing 100 nationalities. This investment will help make the region even more dynamic and appealing and open up more opportunities for French and European citizens in the tourism industry. 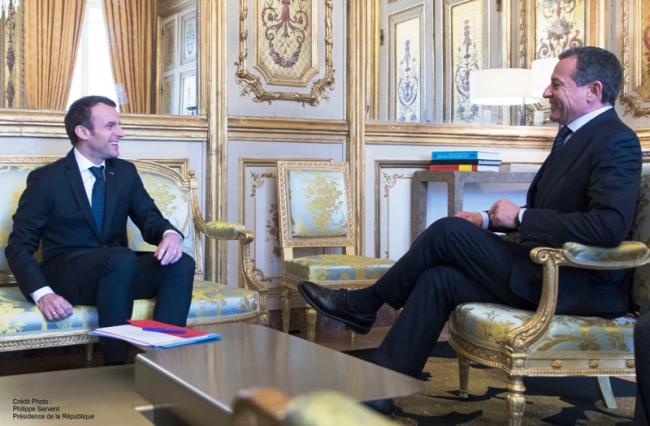 Walt Disney CEO Robert A. Iger with French President Emmanuel Macron at the Palais de l'ElysÃ©e in Paris. The multi-year development will roll out in phases beginning in 2021, significantly expanding the Walt Disney Studios Park. In addition to the three new areas, the creative vision includes a new lake, which will be the focal point for entertainment experiences and will also connect each of the new park areas.

In the spring of 2017, Disneyland® Paris kicked off its 25th Anniversary celebration including new entertainment and experiences for guests.

The resort also completed a two-year refurbishment program, updating and renovating many of the classic attractions in the parks, as well as opening multiple new entertainment shows such as Mickey and the Magician, which won a 2017 International Association of Amusement Parks and Attractions theme park industry award for "Best Theatrical Production." Additionally, several major renovations took place at the resort's hotels including Disney's Newport Bay Club, which is now a four-star hotel.

Just this month, Disneyland® Paris announced plans for a new Marvel-themed attraction that will be coming to the Walt Disney Studios, part of the new Marvel area development. In 2020, the resort will open Disney's Hotel New York – The Art of Marvel, a reimagining of Disney's Hotel New York that will showcase the inspiring worlds of Iron Man, The Avengers, and Spider-Man, among others. And this summer, the Marvel Summer of Super Heroes seasonal event will take place at Disneyland® Paris, where guests can meet their favorite heroes and experience new live entertainment.