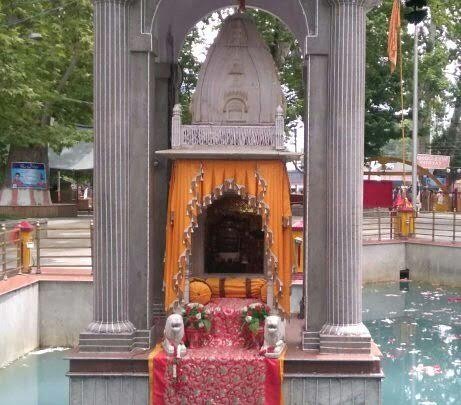 Hundreds of Kashmiri Pandits, who had migrated from the Valley after eruption of militancy in 1989, visited the shrine on the annual festival (Jyestha Ashtami) and held special prayers.

Amid the hymns and bells, men and women, young and old, paid obeisance at the temple dedicated to the goddess Rajnya Devi, popularly known as
Kheer Bhawani.

According to a legend, there were 360 springs surrounding the main spring but they seem to have disappeared as the land has become marshy all around.

At the temple complex, devotees offer milk and “kheer” (pudding) to the sacred spring which is surrounded by Chinar trees. They also shower rose petals and light earthen lamps in the temple.

Pandits living in Jammu and other parts of the country visit the Kheer Bhawani mela annually.

According to District Administration office in Ganderbal, 4,000 people since Thursday paid their respects in the temple.

“Last year 12,000 people paid respect at Tulmulla but due to unrest in 2016 and the many shutdowns, many  Kashmiri Pandits prefer to stay away from the festival,” said an official in Ganderbal to IBNS.