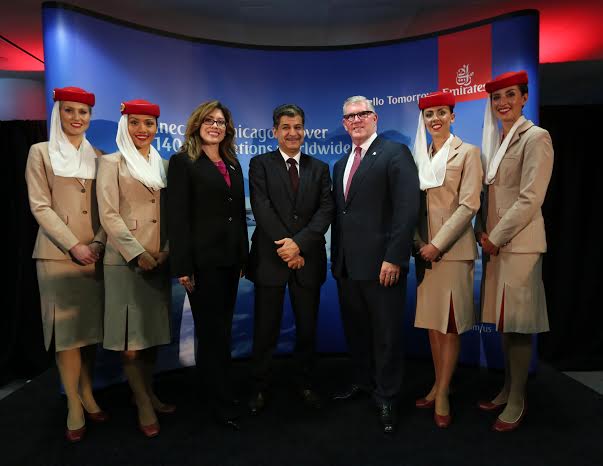 Onboard the inaugural flight was a joint VIP delegation from the U.S. and Dubai as well as international media. The inaugural flight carried passengers from more than 20 different countries to Chicago, demonstrating just how Emirates connects people across the globe.

“The launch of this route, will allow us to offer Emirates’ unique product and award-winning service to passengers flying to and from the Midwest to our home in Dubai or onwards to more than 140 global destinations including the Far East, Africa and India.”

Chicago Mayor Rahm Emanuel said: “Launching Chicago-Dubai nonstop passenger service is another important step in establishing Chicago as one of the top tourism destinations in the world and achieving our goal of hosting 55 million visitors by 2020.”

“Increased connectivity with Dubai will expose more international guests to the world-class hospitality, shopping districts, cultural attractions and architectural achievements that make Chicago one of the greatest cities in the world.”

“Increasing access to other parts of the world creates opportunities for travelers and businesses,” Illinois Governor Pat Quinn said. “2013 was a record year for tourism in Illinois, and this new nonstop flight will build on the advances we have made. It will also help Illinois stay competitive in the global economy and give our businesses new opportunities to expand their markets and create jobs.”

A route for business and leisure

In addition to passenger service, the Chicago-Dubai flight will carry up to 17 tons of cargo per flight and increase trade links between the two cities. Emirates began operating cargo service to Chicago in 2013. Currently, Emirates SkyCargo flies a twice-weekly, dedicated freight service out of O’Hare that carried nearly 12,000 tons of cargo last year.

“This connection will deepen the ties between two of the world’s busiest airports in terms of commercial travel, with a combined traffic flow approximately 133 million passengers in 2013,” said Chicago Department of Aviation Commissioner Rosemarie S. Andolino. “We look forward to building on O’Hare’s successful relationship with Emirates and know that many international travelers will take advantage of this new route.”

Emirates began passenger services to the U.S. in 2004 with services to New York. The airline has steadily added more U.S. routes over the past decade. Chicago is the ninth U.S. gateway to join the Emirates network, following the launch of the Boston service in March. In the past decade, Emirates has flown more than 9 million people to and from the U.S. and is the airline which carries the most amount of passengers between the U.S. and Middle East. To cater to that demand, Emirates is upsizing services on its Dallas, San Francisco and Houston routes to its iconic double-decker A380 aircraft in late 2014.

Chicago is home to 2.7 million residents. The broader Chicago metropolitan area has the third-largest gross domestic product in the United States and is home to approximately 400 corporate headquarters including Fortune 500 companies such as McDonald’s Corp., Walgreen Co., Abbott Laboratories and Boeing Co. – the world’s largest aerospace company.

Emirates is the largest operator of Boeing 777 aircraft in the world, with a fleet of 128 passenger aircraft and 11 freighters. The airline is a launch customer of Boeing’s new 777X. In November 2013, Emirates placed the largest single order in commercial aviation history for 150 777X aircraft valued at $76 billion. Based on the U.S. Department of Commerce’s aerospace export multiplier, this order will support more than 400,000 jobs in the United States.