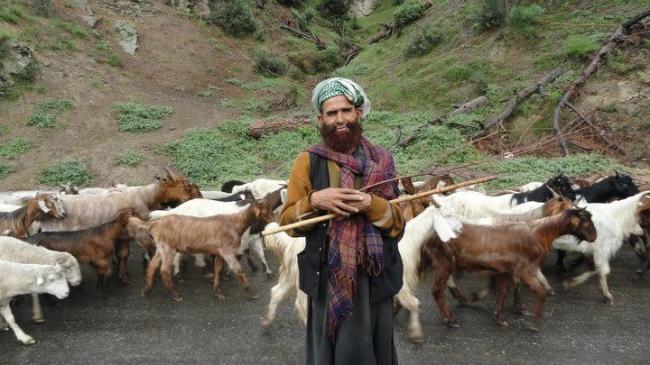 Gujjars and Bakkarwals are the twin tribal communities of Jammu and Kashmir who are mostly nomads and undertake two journeys in a year - one in the summers to the higher pastures in the mountains along with their sheep and horses and the other one in October when they return to the plains for next six months of winter. This annual seasonal migrations have continued in the Himalayas since ages.

In a statement issued here today, Javaid Rahi, head, the Tribal Research and Cultural Foundation -a frontal organisation of Gujjars-Bakkarwals - said that these nomads who are presently under seasonal migration to hilly areas - are facing acute shortage of fodder for their cattle due to sudden fall in temperature in upper reaches .

"This is for the first time when the nomadic Gujjars-Bakkarwals have started moving towards warmer areas of Jammu and Kashmir ahead of their schedule time," said Javaid Rahi adding that they usually start their bi-annual migration to warmer areas in mid October along with their cattle and sheep and live in lower areas for around six months.

"But this year, the Gujjars Bakkarwals –the main tribal communities has started back journey from Shivalik and Pir Panjal and Zojila mountains ranges of Western Himalaya to down areas in first week of September which is quite unusual and unseen", he said.

“Because of low temperature, the grass in pastures died due to cold waves as the temperature in high reaches of Kashmir valley and Pir Pancjal areas of Jammu region is already less the usual which compelled the nomads to move early," said Rahi.

It takes 40 to 50 days for a Tribal family to migrate from hilly areas to a warmer area along with their cattle include sheep’s, goats, horses, buffalos , cows, camels and Dogs.

The Gujjars and Bakkarwals who form the 20 % population of State and 60% of their population is still migratory who live by cattle rearing and hence they annually migrate to climatically comfortable areas where fodder for livestock and their sustenance is easy.

According to a meteorological officials and experts, the decrease of temperature has been caused by the climate change.

Rahi made a fervent plea to the J&K government to facilitate their return journeys in view of the bad weather.