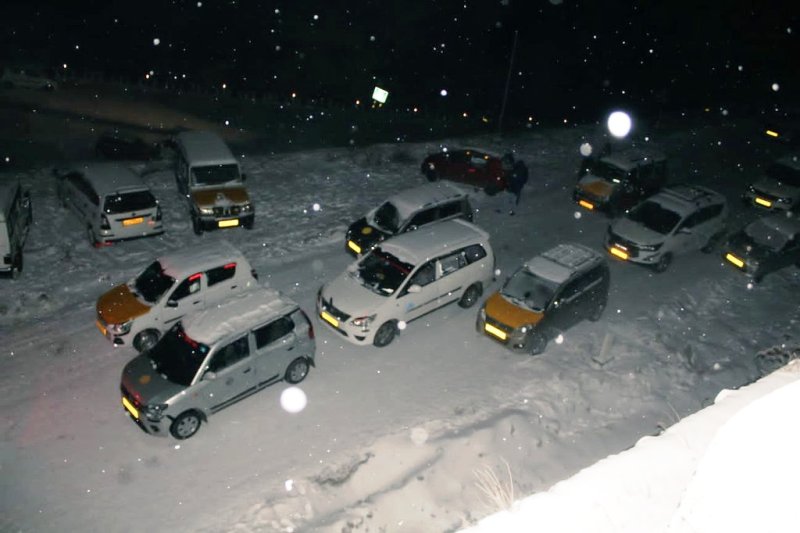 Darjeeling/UNI: As a thick layer of falling snow covered the upper regions and the famed tourist resort Darjeeling town in northern West Bengal itself, the district police on Wednesday issued a travel advisory saying driving on the roads could be hazardous, given the adverse weather conditions.

"Those stuck at Sandakphu, Tonglu and nearby areas are advised to stay at their respective homestays or accommodations. Local police, along with SSB (Seema Suraksha Bal) is exploring all possibilities to rescue them (evacuate) at the earliest," the advisory said as scores of tourists and trekkers in the Himalayan trails continued to be stranded following a snowfall, which lashed since Tuesday.

Darjeeling and the eastern Himalayan state of Sikkim experienced heavy snowfall on Wednesday morning, bringing down the temperature to nearly zero degrees.

Driving on roads of Darjeeling town, Ghoom, Tiger Hills, Simana under Mirik, Sukhipokhari, Maneybhanjhan, and Sandakphu seems unsafe as the roads have become slippery because of the falling snow.

Police teams in groups were seen clearing the snow on the roads in the town, a scene virtually rare in Darjeeling town in decades.

In Darjeeling, vehicles carrying travelers were seen stranded in many areas. The snow also disrupted life in parts of Sikkim as electricity and mobile networks were cut off, a Gangtok report said.

The army rescued over 1,000 tourists stranded near the India-China border in eastern Sikkim on Sunday.

Vehicles are seen enveloped in the snow in Lachung in Sikkim after a spell of heavy snowfall.