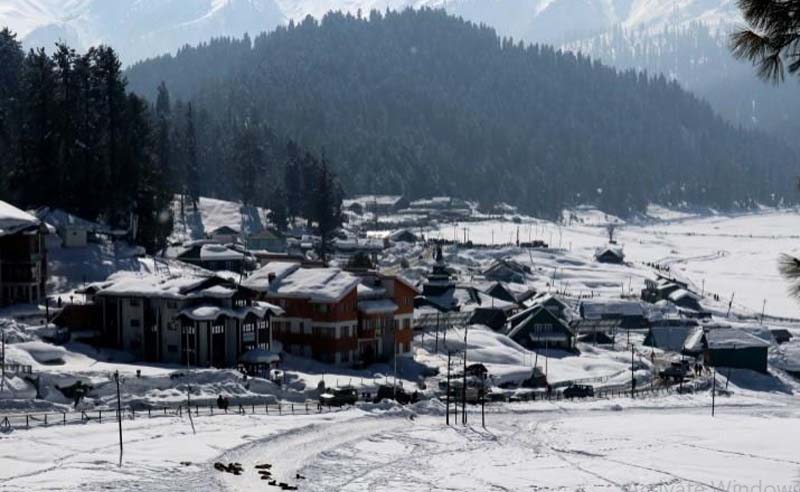 Jammu and Kashmir: Gulmarg gets back sheen, hotels register full bookings till April 15

Srinagar: In a break from the dull tourism of the past few years, the Kashmir’s famed tourist resort Gulmargdraped in snow has brought back the sheen with hotels registering full bookings till April 15.

Gulmarg known for snowy slopes this year saw an increased amount of snowfall coupled with thesustained tourism campaign by the government as well as tourism traders as result of which the hotelsat the destination are witnessing full occupancy.

The tourist resort at an altitude of 8,000 feet, 50 km north of the summer capital Srinagar, has virtuallybeen sold out with most of the hotels registering cent percent bookings next two whole months.

Often described as the ‘heartland of winter sports in India’, Gulmarg will play host to Khelo India WinterGames starting from February 26, besides a number of activities in the days ahead, much to the delightof holiday makers – a number of whom are already camping there while braving sub-zero temperatures.

According to hoteliers, there are over 900 rooms available in the tourism destination in bothgovernment as well as private hotels.

“After a lot of effort we are seeing good footfall in Gulmarg. It isgood for our tourism sector as it has been the worst hit during past couple of years. We are highlygrateful to the government for organizing Khelo India winter games at Gulmarg in which players from allstates of India will participate and will go back as our ambassadors,” said Chairman, Jammu and KashmirHoteliers’ Club, Mushtaq Ahmad Chaya.

“Our travel industry which includes everybody involved in the tourism sector from government to travelagents, hoteliers worked tirelessly to promote Kashmir as well as Gulmarg as a safe tourismdestination,” Chaya said adding that “not only outsiders but locals are also visiting Gulmarg and enjoyingthe serene atmosphere of this beautiful place.”

President, Gulmarg Hoteliers’ Club, Mukhtar Ahmad said: “It is a fact that our hotel rooms both in publicas well as private are almost booked till April 15. We have 600 plus hotel rooms in the private sector;they are occupied and we are hopeful that this year it will remain occupied.”

Ahmad attributed the good response of tourists to Gulmarg to several factors. “First thing is thebewitching beauty of Gulmarg which never fails to amaze tourists; second, people who have plans totravel outside India are finding it difficult to travel in COVID times, so they are opting for Gulmarg; andanother important fact is the promotional activities both by hoteliers and travel agents across Indiawhich helped in a big way.

“Government has been key support in tourism promotion and organizing of Khelo India winter gameswill also help the tourism sector in a big way.”