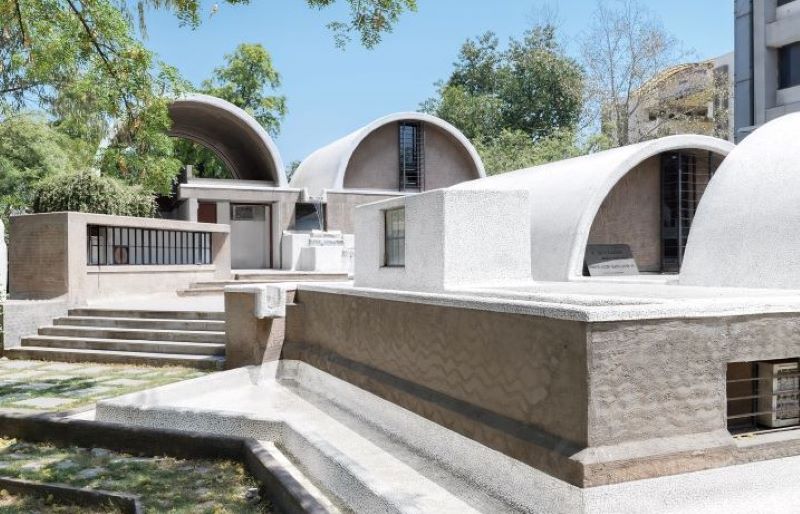 Chicago/IBNS: Wrightwood 659, the Chicago art space devoted to presenting socially engaged art and architecture, will reopen with an exhibition devoted to the work of visionary Indian architect, urbanist, and teacher Balkrishna Doshi.

Recipient of the 2018 Pritzker Architecture Prize, Doshi (b. 1927, Pune, India) worked with both Le Corbusier and Louis Kahn in the 1950s, and later adapted the principles and forms of modernism he absorbed from these experiences into his work with local cultures, traditions, and environments, from low-cost housing and academic institutions, to urban planning projects. In so doing, he both redefined modern Indian architecture and shaped new generations of architects.

This international traveling exhibition was organized by Vitra Design Museum and the Wüstenrot Foundation, in cooperation with the Vastushilpa Foundation.

Jim McDonough, Executive Director of Alphawood Foundation Chicago, the exhibition sponsor, states, "The values inherent to Balkrishna Doshi’s work—inclusiveness and a deep respect for the those who live, work, or study in his buildings—are particularly resonant today, when issues of justice and equity are at the forefront of global consciousness. 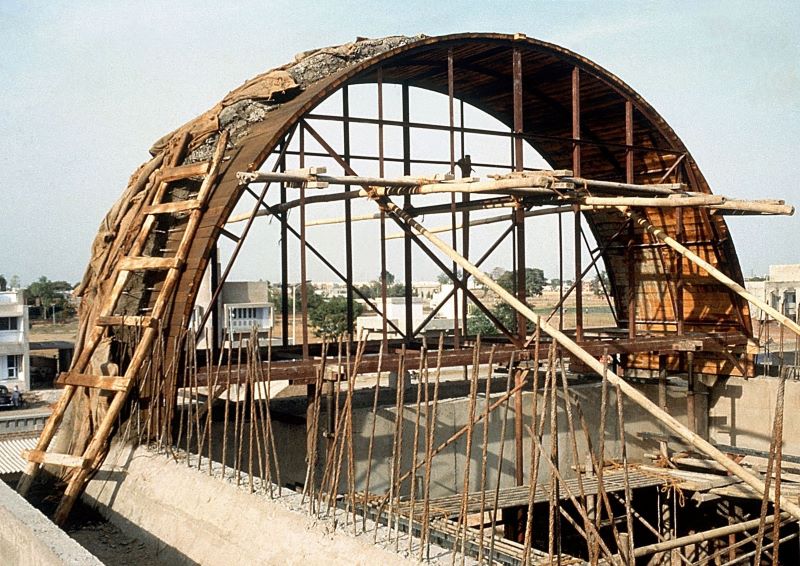 "These are values Alphawood Foundation seeks to promote in all we do, and we are therefore delighted to bring Doshi’s work to Wrightwood 659 in Chicago. We are also grateful to Vitra Design Museum and the Wüstenrot Foundation for helping us bring this remarkable exhibition to North America for the first time.”

This section of the exhibition shows how, inspired by Mahatma Gandhi, Doshi developed approaches to social and experimental housing that were designed to adapt to residents’ changing needs. The Aranya Low Cost Housing Project (1989) in Indore, India, for example—represented in the exhibition by a wealth of materials, including photographs, models, sketches, and more—was built as a model project intended to explore these principles.

Now it accommodates over 80,000 residents from a variety of income groups, with a system of modular units that can be customized to suit residents’ needs, preferences, and financial status. Ranging from one-room homes to spacious houses, the residences are organized in a system of courtyards of varying sizes and intersecting internal pathways

Doshi’s own house, known as “Kamala House” (1963), is also explored here, providing an example of residential planning on a smaller scale. This generous yet economical building, with a cross-shaped floor plan, maximizes lighting throughout all spaces, while insulated brick walls trap and minimize the summer heat. Highlights among the materials on view here are full-scale reproductions of the house’s entry area and roof pergola, and examples of chairs Doshi designed for the house. 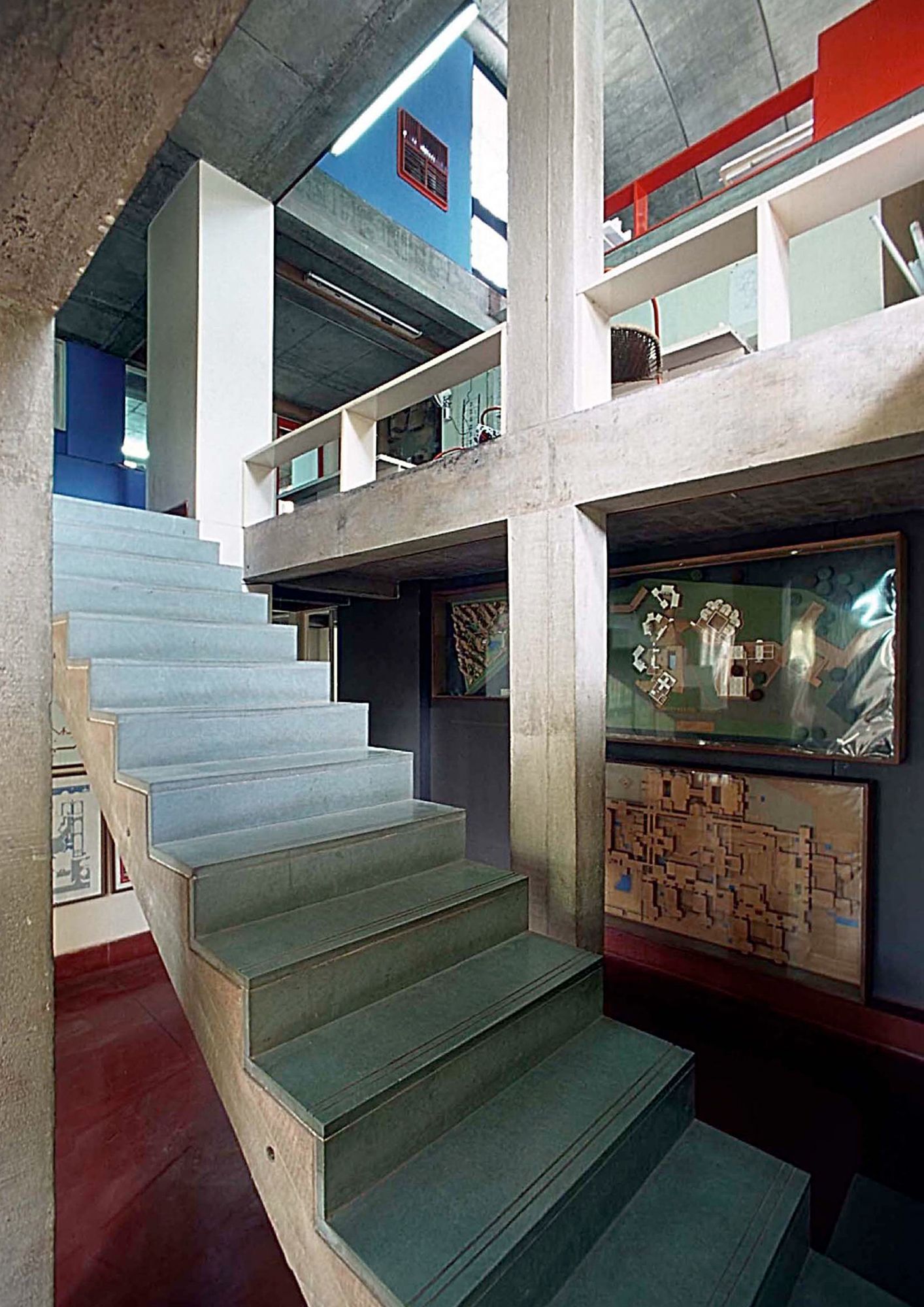 Here the exhibition moves to public buildings and large-scale city-planning projects. An early example is the Institute of Indology in Ahmedabad (1957–1962; modernized in 2011–2012), built to house ancient manuscripts, a research center, and a museum. It was one of the first projects Doshi designed following his work with Le Corbusier.

While the influence of the elder architect is clear, the building’s veranda and other shading strategies for protecting the ancient documents within draw on Indian design.

Doshi’s masterplan and urban design guidelines for Vidhyadhar Nagar (1984), a residential development of 150,000 dwellings located on approximately 865 acres in the outskirts of Jaipur, are also examined in this section. Conceived as an energy-conscious city and inspired by the old walled city of Jaipur, it amalgamates ancient town-planning principles, contemporary needs, and contextual realities, and was designed to meet the needs of up to 400,000 residents.

Schools, health centers, playgrounds, and other resources were planned along a linear open space forming the central activity spine. Natural stone, overhangs, and balconies not only help improve the micro-climate, but also re-create the visual experience of the local traditional architecture. 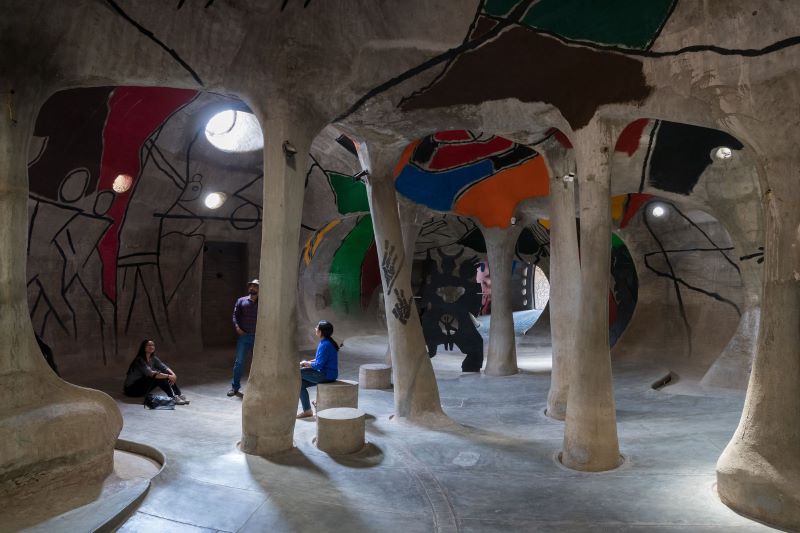 Doshi’s position as a leading educator is highlighted in “Shaping an Integrated Education.”

A key project here is the campus of the Centre for Environmental Planning and Technology (CEPT) in Ahmedabad, on which Doshi realized some of his most significant buildings over a period of 40 years. In 1962, he established the School of Architecture, a multi-disciplinary institution grounded in the belief that education is nourished by interdisciplinary interactions.

As seen in numerous drawings, models, and photographs, Doshi fostered exchange and dialogue among students and faculty alike by designing the School of Architecture building as a free-flowing space without compartmentalization or segregation. Through both its buildings and its teachings, the School has changed the face of architectural education in India. Today it is one of the country’s most important centers for urban planning. 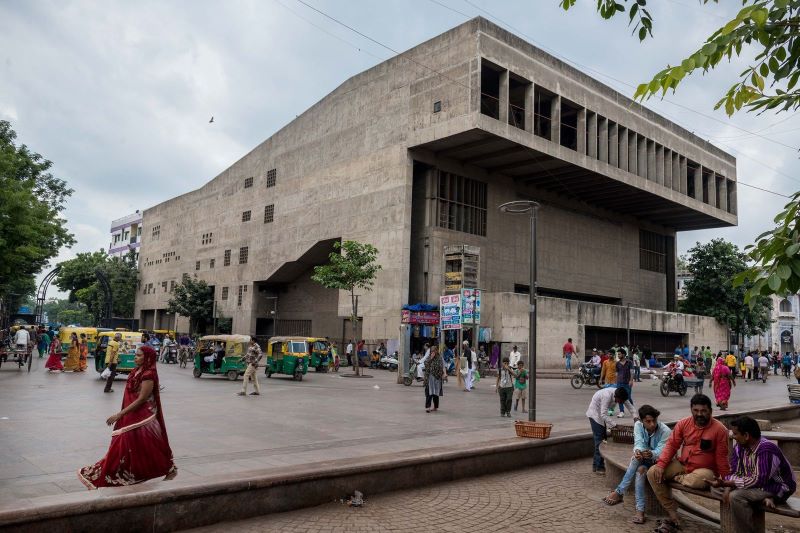 While the School of Architecture is sited on top of an old brick kiln that greatly influenced its plan and layout, the art gallery Amdavad Ni Gufa (1994), located on the same campus, is partially buried—gufa is Gujarati for “cave”—in order to resolve issues arising from the local climate.

Its structure, comprising different-sized mounds integrated into the natural landscape, was created with computer-aided design, but the construction itself was carried out by unskilled workers using recycled materials and simple hand tools.

Finally, “Building Academic Institutions” explores a few of the many institutional buildings Doshi has designed in the last 60 years.

One important example is the Indian Institute of Management (IIM) in Bangalore (1977, 1992), seen here through a range of exhibits including photographs and numerous drawings.

The large campus of this institution was built over a period of 20 years in a process that involved numerous additions and alterations. Both its courtyards, which are designed as large gardens, and its corridors, conceived as places for spontaneous communication, are intended to extend the learning spaces. Pergolas and cut-outs within corridors fringed with greenery transform space through the changing light during the day.

A fascinating architectural conception, the IIM has become an important think tank, contributing to India’s emergence as an economic power over the last decades.

Another milestone in Doshi’s institutional architecture is his own studio, Sangath, in Ahmedabad (1980). Memories of his childhood home and of Le Corbusier’s studio in Paris are fused in this building’s vocabulary of spaces. “Sangath” means “moving together” in Gujarati, and today three generations of Doshi’s family work side by side here. As with all of his buildings, landscape, climate, and purpose are all integral to his design. Surrounded by Ahmedabad’s new high-rises and its elevated metro line, Sangath stands as an oasis within the bustling city. 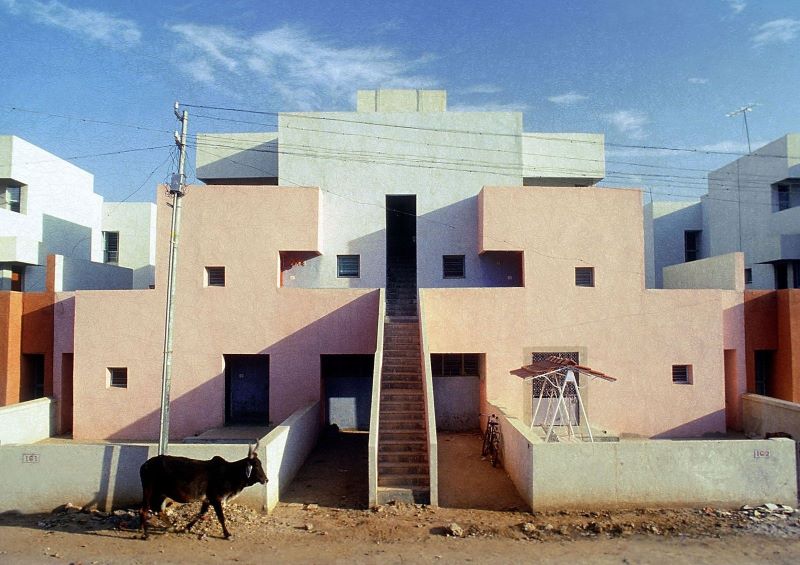 The exhibition is a project of the Vitra Design Museum and the Wüstenrot Foundation in cooperation with the Vastushilpa Foundation. 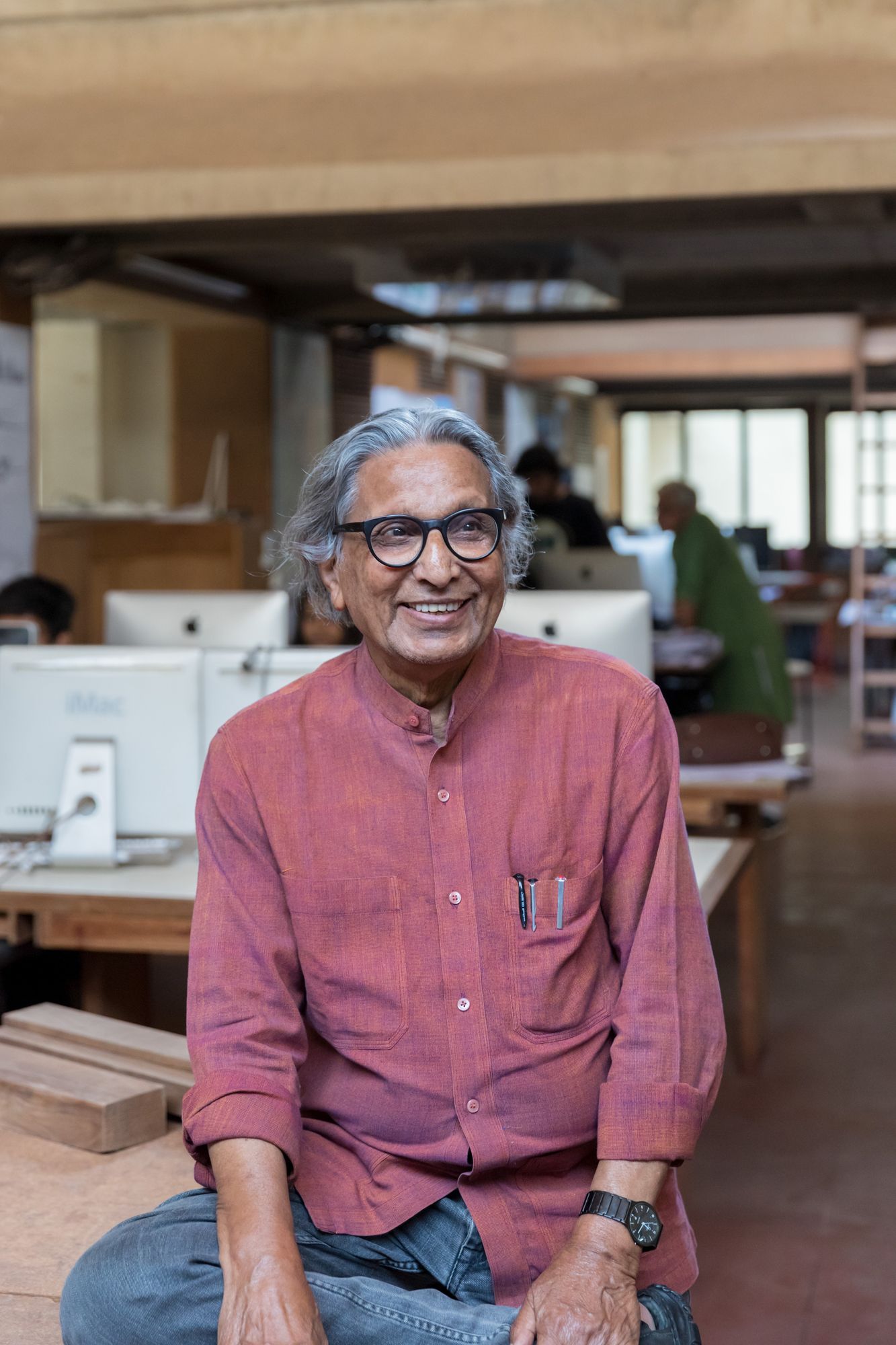 The Wrightwood 659 presentation of Balkrishna Doshi: Architecture for the People is made possible by Alphawood Foundation Chicago.