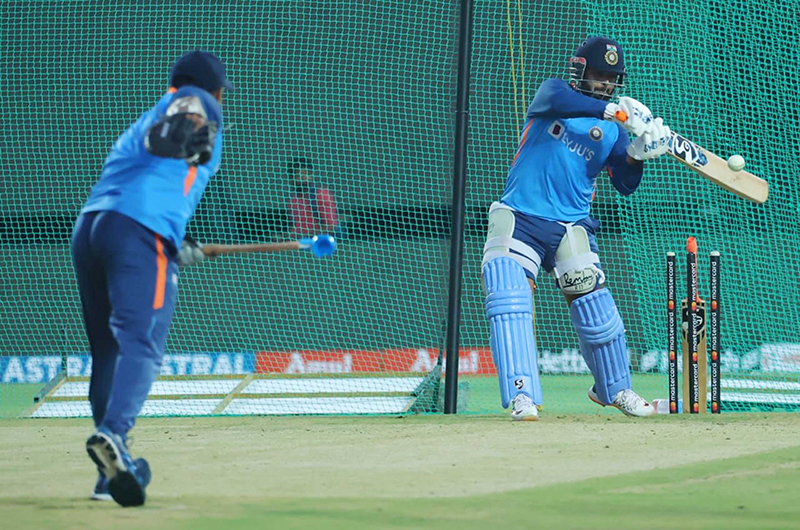 Thiruvananthapuram/UNI: Another close series is expected as India and South Africa begin the T20I series as both sides make a final dash for World Cup preparations.

The first T20I match will be played here Wednesday when things have changed a lot for both the teams since June they played against each other.

Virat Kohli seems to have come into his groove as he has cracked a century and a couple of fifties before this series.

Suryakumar Yadav and skipper Rohit Sharma also are coming back into their own zone.

KL Rahul has been disappointing with the bat in the previous series against Australia and he would also be itching to make good contributions.

Luckily Arshdeep Singh and Harshal Patel will get a chance to impress against South Africa in the race for the third pacer option.

So also, Rishabh Pant will get a go in the absence of Hardik Pandya, who has been rested for the South Africa series.

The Chennai star would love to grab the opportunity to stick to his adage of a finisher.

Yuzvendra Chahal would want to script a heroic show with the ball after his ordinary show against Australia.

Quinton de Kock has been his bunny which could give him the right king of grist to grind.

He had claimed De Kock's wicket 6 times in 39 deliveries he bowled to him.

India will be without the services of pacer Mohammad Shami, Deepak Hooda and Bhuvaneshwar Kumar.

While Shami has not recovered yet from Covid-19, Bhuvi has been rested in the lead up to next month's World Cup. Hooda is suffering from a back injury.

Shreyas Iyer and Shahbaz Ahmed have been added to the squad as replacements to Shami and Hooda.

Dravid's staff might give a chance to Ravichandran Ashwin, but replacement would be a big challenge.

For South Africa, the journey has been rosy without any thorns.

The headache for them however is making way for skipper Temba Bavuma who returns to the national side after recovering from an elbow injury that he suffered on South Africa tour to India last June.

South Africa also face plenty of plenty. Either Reeza Hendricks or Rilee Rossouw; Heinrich Klaasen or Tristan Stubbs; Marco Jansen or Dwaine Pretorius; and Rabada or Anrich Nortje, would get a chance to play in a match.

All these players are high-quality players and match-winners, and it would be a tricky situation for Bavuma to make some tough choices. However this shows the strength of the side with tough competition within the team.

Wayne Parnell would be keen to go all guns blazing against India's top order, who mostly bat right-handed and had been uncomfortable with left-arm pace.

In the batting department, South Africa will bank on Quinton de Kock and David Miller to go one-up against in-form Axar Patel and Jasprit Bumrah who is yet to get back his rhythm.