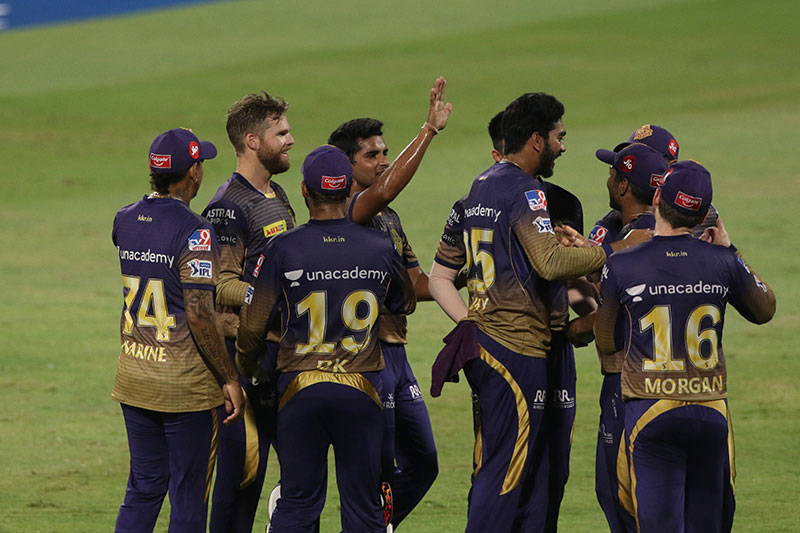 With the win, KKR are fourth on the table with 14 points in 14 games and are the favourite to qualify for the playoffs as they pushed their net run rate to +0.587.

Mumbai Indians (net run rate: -0.048), who are still in contention for the fourth spot, need a win by a huge margin in their last game against Sunrisers Hyderabad.

RR finished seventh on the table in the season with 10 points in 14 games.

Asked to bat first, KKR batters put 171/4 on board as Subhman Gill starred with the bat as he scored a 44-ball 56 while Venkatesh Iyer (38 off 35) and Nitish Rana (21 off 14) made telling contributions as well.

Shakib Al Hasan clean bowled Yashasvi Jaiswal (0 off 3) in the first over while Shivam Mavi dismissed Sanju Samson (1 off 4) in the next over to leave RR at sea at 1/2.

Express pacer Lockie Ferguson further piled on RR misery by removing Liam Livingstone (6 off 6) and Anuj Rawat (0 off 1) in the fourth over.

Shivam Dube (18 off 20) and Glenn Phillips (8 off 12) steadily added 20 runs for the fifth wicket to restart the RR run chase. However, the revival was short-lived as Mavi holed out both the batters in the eighth over.

The seventh RR wicket came in no time as well with Varun Chakravarthy trapping Chris Morris lbw for a duck.

Though Rahul Tewatia (44 off 36) fought a lone battle from there on with no recognised batter to back him up, RR never stood a chance.

Ferguson picked his third wicket in Unadkat (6 off 5) while Chetan Sakariya (1 off 5) was run out by Shakib and Dinesh Karthik.

Tewatia was the last wicket to fall as he was played down by Mavi.