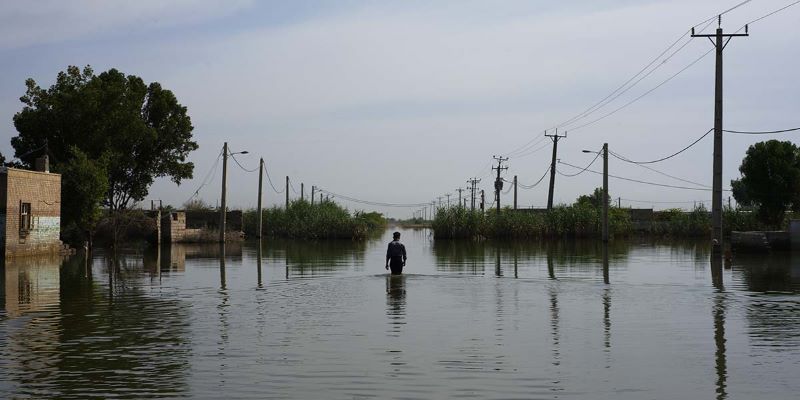 Kolkata/IBNS: The USP of any International Film Festival is that this is the only space where you get to watch films from beyond Hollywood and UK. You have no chance to watch films from other countries and especially the ones that capture the top awards in every section. Let us take a closer look.

Very predictably, it was the outstanding feature film from Iran called Bander Band directed by Manijeh Hekmat ran away with the Best Film Prize in the section Innovation in Moving Images.

The story has been shot right across Iran during the terrible floods.

It revolves around a three-member band which comprises a married couple where the wife is heavily pregnant. They have to travel to Tehran to deliver their first performance.

But there are severe blocks along the way with the flood waters, the road blocks, a broken bridge and a favourite guitar floating on the flood waters, and in the end, looking at their empty van, we are left wondering whether it was just a dream of a journey all of us want to make but do not. It overwhelmed the audience which responded with pin drop silence.

Biswajit Bhora won the Best Director Award in the Indian Film category at the 26th KIFF announced on Jan 15 at the Ekta Manch in the Nandan complex.

The film, God in the Balcony (Assamese) is an explosive yet totally understated account of the true story in which a man was compelled to carry his dying wife to the hospital on a bicycle with his daughter miles away to the hospital which declares her to have died already.

When politicians step in to capitalize on this incident, he takes a diverse route back and cremates her away from the public eye.

False Eye in Malayalam, directed by Rahul Riji Nair, won the Best Film Prize in the Indian cinema category. This offers a unique perspective on the use of the videocam and its difference when handled by small boys and when handled by a manipulative adult.

The videocam is a character in the film.

The NETPAC Jury for Asian Cinema handed its prestigious award to the Bangla film The Salt in the Water (Bangladesh) directed by Rezwan Shahriar Sumit.

The film explores the lives and struggles of a little-known fishing community in Bangladesh.

Ranjan Palit, a member of the three-member jury (of which the other two, namely Patricia Elser Gillespie and Brian Bennett), requested that the prize be shared between the Bangladeshi film and another Malayalee film Between One Shore And Several Others directed by Sreekrishna KP but they refused to give their consent as a result of which the Bangladeshi film bagged the award.

Shambala from Kyrgyzstan, directed by Artykpai Suyundukov, is also about a myth believed by a little-known tribe in the country who consider a deer to be their “earth mother.”

A little boy glimpses this deer and asks his father about it. The deer forms the fulcrum of the story and the film.

The way the little boy perceives the deer – which may be real or imaginary or just a myth – and the way its story goes around, impacting on the lives of the community for generations together evolves into one of the most beautiful films in the festival. It rightly bagged the Best Director Award in the Cinema of Moving Images section for Artykpay Suyundukov.