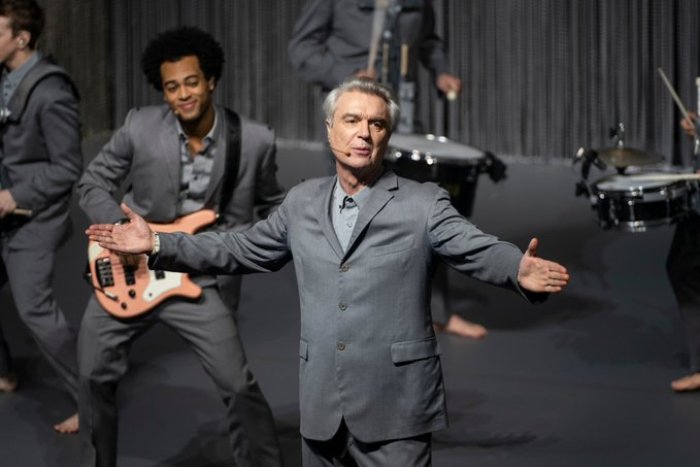 Toronto/IBNS: The 45th Toronto International Film Festival (TIFF) kicked off on Thursday with the Opening Night Gala Presentation of the Spike Lee-directed filmed version of the Broadway-acclaimed David Byrne’s American Utopia at Visa Skyline Drive-In at CityView, Toronto at 8 pm.

The social and political issues raised in the show are tactfully transformed to reveal how audiences can come together during challenging times through the power of entertainment.

Working with a new band and dancers Byrne turned his music with a call to connect with one another, to protest injustice, and, above all, to celebrate life.

The mood of intellectual reflection with which the song, “Here,” from Byrne’s 2018 American Utopia album opens is soon transformed into a mysterious and artful gesture and dance-floor funk when Byrne is joined on stage by vocalist-dancer Tendayi Kuumba and dancer-vocalist Chris Giarmo.

68-year old Byrne also covered a protest song about police brutality in Janelle Monáe’s “Hell You Talmbout,” in which Byrne sings, plays instruments, and dances along with an 11-person troupe including Toronto’s Jacquelene Acevedo with the band chanting out the names of Black Americans killed by police while performing high-energy choreography by Annie-B Parson.

Born in Atlanta and raised in Brooklyn, Spike Lee's debut feature, She’s Gotta Have It (86), won the Prix de la Jeunesse at Cannes.

The distribution of the film is done by the US, publicity done by Home Box Office (HBO) -- an American pay television network owned by WarnerMedia Studios & Networks and the flagship property of parent-subsidiary Home Box Office, Inc. -- and the film distributed in Canada by Crave.