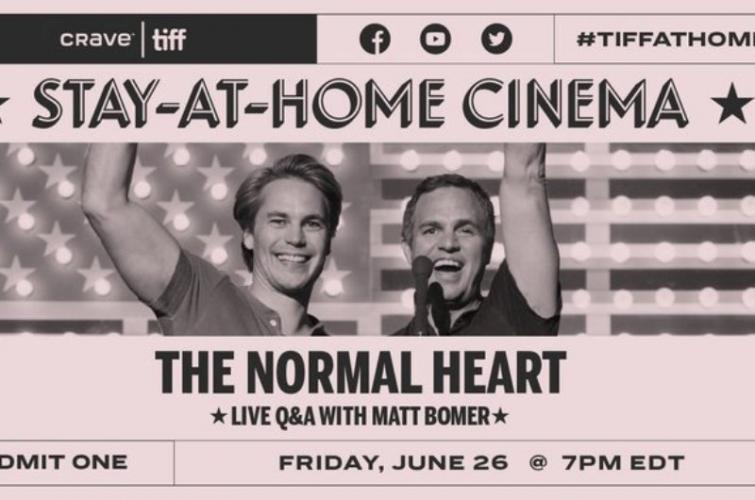 Canada: TIFF presents special home-screening of the play 'The Normal Heart' on Crave

Toronto/IBNS: A special at-home screening of award-winning play 'The Normal Heart' would be hosted by Toronto International Film Festival (TIFF) in partnership with Pride Toronto on June 26 at Crave to celebrate Pride Month, TIFF reports said.

Directed by Ryan Murphy’s (American Horror Story) star-studded adaptation of Larry Kramer’s play 'The Normal Heart' is about the onset of the HIV/AIDS crisis in New York City in the early ’80s.

At 7:00 pm EDT, the playwright and activist Larry Kramer will be joined by actor and LGBTQ rights activist Matt Bomer (Magic Mike, Magic Mike XXL) to discuss his work on the film and the enduring legacy of its screenwriter on tiff.net, Facebook, Twitter, and YouTube.

'The Normal Heart', starring Bomer, Mark Ruffalo, Julia Roberts, Alfred Molina, and Taylor Kitsch could be watched  at 7:30 pm EDT, by logging in to Crave

Scripted by Larry Kramer from his Tony Award-winning 1985 play, and directed by  Ryan Murphy (American Horror Story, Glee, Nip/Tuck), 'The Normal Heart' recounts the onset of the HIV/AIDS crisis in New York City from 1981 to 1984, as seen through the eyes of a writer and activist Ned Weeks (Mark Ruffalo).

When one of his best friends dies due to the mysterious illness, Ned, at the urging of a concerned doctor (Julia Roberts), sets out to alert about the deadly disease within the gay community by joining with a circle of friends to form an activism and advocacy group.

With the rise of the death toll, Ned’s confrontational behaviour creates tension with his allies, including his lover Felix (Matt Bomer), a closeted New York Times reporter struggling to bring mainstream media attention to the crisis.

Featuring a combination of film, television, and theatre vets including Alfred Molina (Love Is Strange, Prick Up Your Ears), Taylor Kitsch (Waco, True Detective), and The Big Bang Theory’s Jim Parsons (reprising his role from the play’s 2011 Broadway production), The Normal Heart is “a powerful memorial to the men that lost their lives and those they loved while fighting to bring the AIDS epidemic to light” (Jessica Johnson, Time Out Chicago).