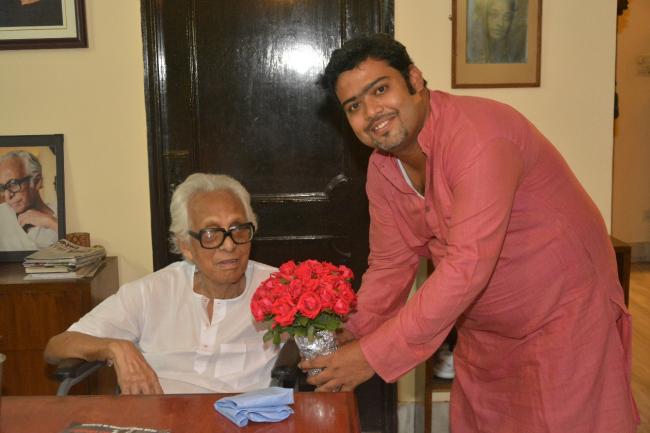 Kolkata, May 18 (IBNS):  Dhakuria Tarun Mahal, one of the most popular and active social clubs in southern part of the city, felicitated veteran and internationally acclaimed film director Mrinal Sen on the occasion of his 95th birthday recently.

Club officials on Monday  paid a visit to the house of the film maker, who along with his contemporaries Satyajit Ray and Ritwik Ghatak, is often considered to be one of the greatest ambassadors of Indian parallel cinema on the global stage, and  paid their regards to the great director and presented him a citation  along with a flower boquet.

Tarun Mahal, which is  known for its philanthropic  and  social activities, also celebrated the day  as the first anniversary of  their mobile library  which serves the need of people in the area.

The club earlier celebrated “ Poila Baisakh”,  the Bengali New Year,  and organized a cultural programme on the occasion  which was highly enjoyed  by people in and around  Dhakuria.