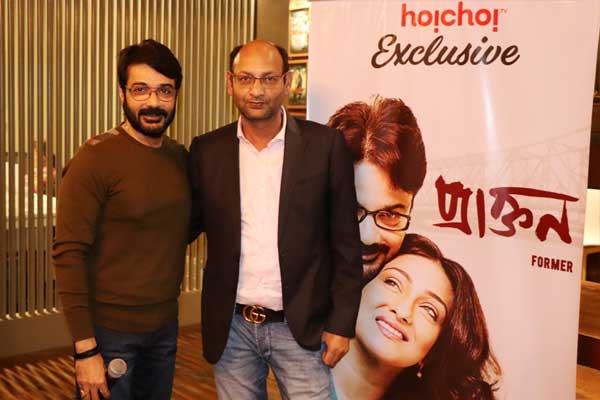 Kolkata, Jan 5 (IBNS):Hoichoi, the world’s largest digital Bengali entertainment content platform, announced the world digital premier of Praktan, the most successful Bengali film of 2016, which has started streaming globally on the platform from Jan 5.

Praktan is also the sixth world digital premier on hoichoi in a span of only six weeks after acquiring digital rights of superhit films like Posto, Paanch Adhyay, Ek Nodir Golpo, Room No. 103 and Bye Bye Bangkok.

Vishnu Mohta, Co-Founder, hoichoi said, ““We are delighted with the response that Posto has received and continues to get on hoichoi. Praktan, another gem from Windows Productions strengthens our content offering for our discerning consumers worldwide and we look forward to more such partnerships going ahead.”

After Posto and now Praktan, Bela Seshe would be the third film from Windows Productions going to be available soon on hoichoi.

'Praktan' which means ‘Former’ is about the failed marriage of Ujaan (Prosenjit Chatterjee) and Sudipa (Rituparna Sengupta). The film opens at Kurla railway station in Mumbai, where various characters are seen boarding a Kolkata bound train.

Along with Sudipa, the first class compartment also has a group of 4 musicians (popular musicians in real life – Anupam Roy, Anindya Chatterjee and Upal Sengupta (of the popular band Chandrabindoo) and Surojit Chatterjee (of Bhoomi fame), a honeymooning couple, an elderly couple played by Soumitra Chatterjee and Sabitri Chatterjee, and a mother Molly (played by Aparajita Adhya) with her daughter Putul. Over the course of the 30 odd hours of the train journey, it takes us through how the various characters are dealing with ghosts of their past.

Shiboprosad Mukherjee, Director of Praktan said, “We would like to thank hoichoi for giving our movies a global platform and audience. Bela Seshe will be the third film from Windows Productions that will be streaming later this month on hoichoi."