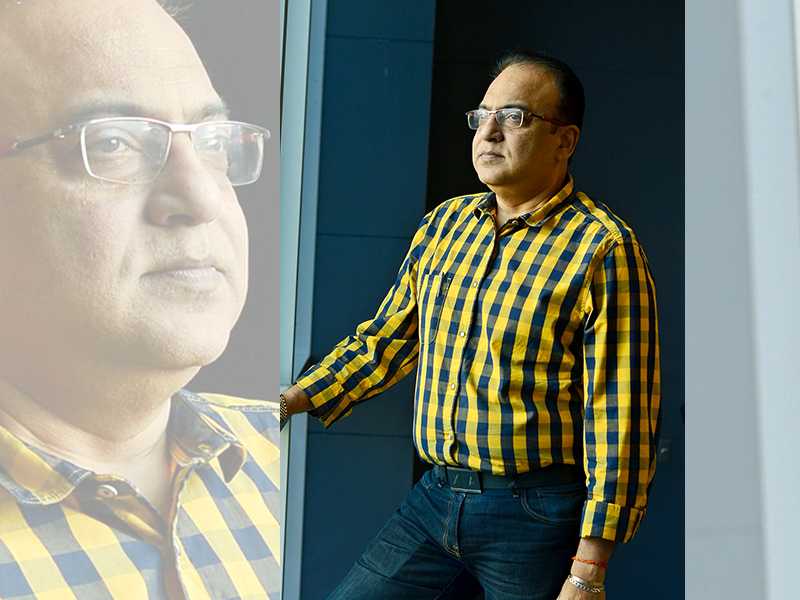 Senior filmmaker Arindam Sil is back with his fourth film in the Byomkesh franchise, Byomkesh Hotyamancha, which is slated for Aug 11 release. India Blooms correspondent Souvik Ghosh catches up with the director at SVF office for a candid chat over the film

Q. What keeps you going with the Byomkesh franchise?

A. The incredible demand from the audience for the fourth film in this franchise after its third installment, titled Byomkesh Gotro, has actually led us to this.

Q. How challenging was it to finish the incomplete story (Bishupal Bodh by Sharadindu Bandyopadhyay) for this film?

A. I always work out of my comfort zone. I normally try to not get into something that's accepted. When it came to Byomkesh, I wanted to do something more than what we have done over the last three films and especially when they were the travelogues where Byomkesh was portrayed as a larger-than-life character with the scenic views, horses, jungles, background scores, music.

Since it was an incomplete story, we had an advantage of doing a film in a regular franchise where the audience would not be able to know who had committed the crime.

Q. Recreation of Calcutta during the Naxalite movement must have been a job to do.

A. The outdoor shooting was a major challenge because Kolkata has lost its character unlike many European cities. We have failed to maintain the character of the city, which is more than 300 years old. It becomes a challenge for filmmakers in the case of period films. But we found streets and locations within the city and did a lot of CG Work of cleaning up.

Q. The shooting of old Calcutta must have given you a nostalgic feeling.

A. I was nostalgic during the film's print check where I got a glimpse of the old Calcutta when all cables and wires were cleaned up. I had almost gone back to my childhood days. This was the clean Kolkata which we used to see. It was a kind of revisit to the city for me.

Q. Also theatres in this film must have given you the same feeling.

A. Yes. I had worked for the commercial Bangla theatre for quite some time. It was nostalgic too. Also I felt hurt in the course of the shooting remembering how the commercial Bangla theatre was wiped out of its existence and there was no effort to maintain it. It was very sad to see new buildings or shopping malls coming up in spaces like Bijon Theatre, Rangana, Sarkarina. These saddened me. It's sad to see Rupbani Cinema Hall, which was named by Tagore (Rabindranath Tagore), is on the verge of being broken down.

Q. But the experience of enacting theatre in this film must have given you a different feeling.

A. It was a very interesting part of treating the film because this whole story is about a murder in the theatre. A theatre on Mahabharata was needed to be filmed. The music and acting were different which was challenging for the actors who played different characters in the theatre space. So all these made the package very interesting. However, the rest of the film was treated very cinematically.

Q. Tell us about Abir and Sohini (Abir Chatterjee and Sohini Sarkar), who have worked in all four films you have directed so far.

A. Abir looks extremely chiselled with a toned up body which adds to the new look of Byomkesh, who in this film is a bit matured character with grey hairs. Both of them were perfect look wise besides they kept on living with performances.