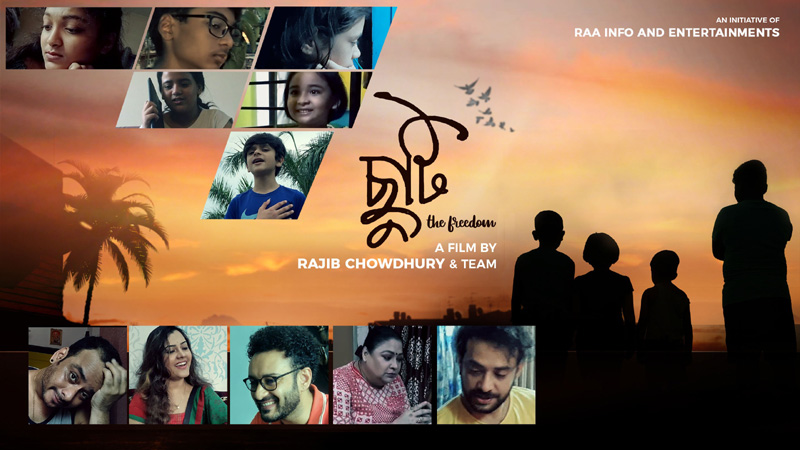 Kolkata/IBNS: An upcoming film has decided to look deep into the issue how the pandemic containment norms have traumatised children.

Raa Info and Entertainments recently launched the trailer of their upcoming short film ‘Chuti – The Freedom’, which is based on the ongoing situation where the nation-wide closure of schools coupled with the forced confinement at home, the inability to go out and play, to meet friends, have affected many children.

The film, whose trailer was launched on digital media platforms, is directed by Rajib Chowdhury, and depicts the feeling of helplessness among children and the loneliness felt by them during the pandemic crisis, including changes in their behaviour.

Said Chowdhury, “Children are suffering enormously. So every parent, teacher, should be vigilant and do everything possible to reduce this negative impact on their mind.”

Rajveer Chowdhury, Debraaj Roy, Adwitiya Ghosh, Ritwika Mitra, Inika Majumdar, and Pekham are the children who are debuting in the key roles in the film.

Rajib Chowdhury is an Indian writer and director who made his debut in 2016 with Priyanka Sarkar, June Malia and Saheb Bhattacharya starrer drama ‘Romantic Noy’.

RAA Info and Entertainments is a venture by Rajib Chowdhury.

The director also expressed his special thanks to Piya Sengupta, Shaheb Bhattacharya, Partha Sarathi, Ishaan Majumder, Madhuri Dey, and Sujay Bhowmick for their support for the upcoming short film.

Chuti – The Freedom is slated for release on their official YouTube Channel and other digital media platforms soon.