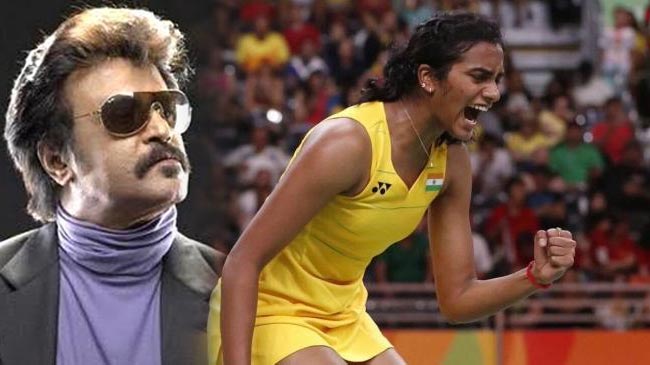 Sindhu I am your fan: Rajnikanth tweets

"Hats off to you #PVSindhu .... I have become a great fan of yours ... Congratulations !," Rajnikanth, who is not so active on Twitter, posted on Friday.

Limiting not to Rajnikanth, actor Amiatbh Bachchan also thanked the 21-year-old for making the country proud.

"#PVSindhu you played your heart out ! All of India is so so proud of you .. Thank for giving us that moment of pride !!!"

Ending a thrilling encounter, which was played brilliantly by both the players, Spain's Carolina Marin defeated India's badminton sensation PV Sindhu in the final of the women's singles event at the Olympics to clinch the gold medal here on Friday.

Sindhu bounced back in the first set from behind to win it 21-19.

After a defeat in the first set, the Spanish star came back sharply to beat Sindhu  21-12.

As the two players were tied 1-1, Marin came out and blew away Sindhu in the third set and clinched it 21-15.

The win also helped her win the match 2-1 and thus win the gold medal.

Sindhu settled for the silver medal.