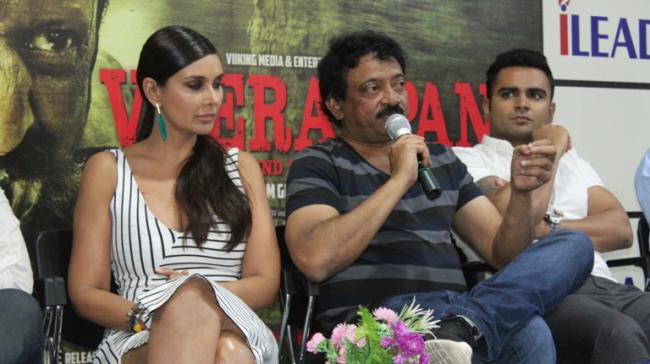 Was fascinated with the Bombay underworld: Ram Gopal Verma

India Blooms News Service | | 21 May 2016, 11:47 am
#Ram Gopal Verma, #Veerappan, # Kolkata, #Mumbai Underworld
Kolkata, May 21 (IBNS) Film director Ram Gopal Verma, who was in Kolkata on Friday to promote his latest movie Veerappan on the life of the late sandalwood smuggler of the same name, said he was earlier fascinated with the Bombay underworld.

Asked if it was easy for him to make films on the Mumbai criminal gangs, as he hailed from the southern part of India, RGV said, "As an outsider I was fascinated. When I reached there for the first time, I used to read newspapers and their pictures would crop up. These guys looked like any other ordinary guys, so, people in Mumbai were so used to seeing them, they took them for granted."

"I understood more. Being an outsider was an advantage."

RGV was in town to promote his upcoming film Veerappan, a namesake movie based on the infamous poacher and sandalwood smuggler.

The cast of the movie, including Sandeep Bharadwaj, who played the titular role, along with Lisa Ray, Sachiin J Joshi and Usha Jadhav, too attended the promotions.

Speaking about the film, Lisa, who divides her time between India and Canada, said she always knew she was coming back.

"I knew I was going to come back," she said, while showering praise on her director. "RGV has always been a catalyst. He has done so many wonderful films over the years."

The model turned actress however refrained from giving away any secrets from the films.

Asked about any significant moment from the film, Lisa said, "There have been so many, not just in the film, but while shooting was taking place. We had loads of fun, but I cannot give away anything as of now."

Sachiin said that he is optimist about the film doing well. "Pretty optimist, it can become an epic film," he added.

Asked about his research process, RGV said that it took him a long time to find out facts, since very little about Veerappan was ever documented.

"I met some of the ex gang members of Veerappan. I spoke with negotiators, with government officials. I had a conversation with Veerappans's wife," he said.

About the most difficult aspect he faced while filming, RGV said was the terrain.

"Veerappan used to operate in the forest. It was difficult to access the terrain, but with experience, we managed to do it," he stated.

Sandeep Bharadwaj, the man who portrayed the titular role, said it was difficult for him to play the character initially. Sandeep thanked his director for guiding him through.

Bharadwaj, 30, who hails from the north (Haryana), said the dialect wasn't a problem, but portraying someone who's in his 50's was.

"Not much about Veerappan was available, but RGV sir briefed me," he said, while adding, "Veerappan was wild. He lived in the wilderness. I had to be like him. He was always alert. I had to prepare accordingly."

Usha, who plays Muthulakshmi, Veerappan's wife, says it was hard for her, since the character she portrayed is very much alive.

"This is the first time I played a character who's alive in real life," she said.

"People still have some concept about Veerappan, who he was, but people do not know anything about Muthulakshmi," Usha added.

Asked about his advice for budding minds, RGV said that one has to love what they are doing.

"I do nothing but films. I have not taken a single holiday for the last 35 years. the good thing is, I take decisions very fast and they materialise into something."