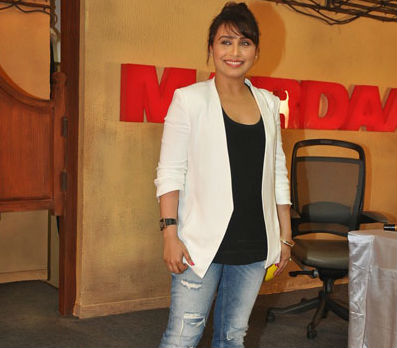 Now that you are married to Aditya Chopra, do we address you as Rani Mukherji or Rani Chopra?

My name is Rani Mukherji and I would like you to call me Rani like everyone has been calling me since the time I entered Bollywood. I love my name a bit too much. So for films, my name will remain Rani Mukherji. But in personal life when I get my children admitted to school, then there will be a change in my surname.

What message do you want to give through your film Mardaani?

This film is extremely close to us as it is our way of awaking the spirit of “mardaani” in all women and girls.

Do you have a mardaani in you?

From my childhood my dad (Ram Mukherjee) used to recite to me - Khoob Ladi Mardani Woh To Jhansi Wali Rani Thi.  My dad is from Jhansi and my name is Rani and I remember he took me to the Jhansi Fort many times for early morning walks and there he used to tell me a lot of stories about Jhansi ki Rani Lakshmibai. I used to feel so inspired by her getting to know how strong she was … strong not in the sense of just physicality, but how strong she was in her spirit. That is what all we women are. We all are descendants of Shakti and we all have that power in us.

Have you ever shown your Jhansi ki Rani avatar to Aditya Chopra?

How has been your marital life going?

The joy is such that I feel like feeding laddoos to everybody every day.

What made you plan a secret wedding in Italy?

Coming back to films, of late you are mostly doing women-oriented films. Is that a conscious choice?

I have been portraying mardaani roles from my very first film Raja Ki Aayegi Baraat (1997). In all the films I have done so far, I have tried to portray women power through my characters and convey a strong message to my audience. I have always been attracted towards such  roles.

How was it playing a cop for the first time?

I am lucky that such a role landed up in my lap. It was a great experience. As a part of my research I had to meet many real life police inspectors. They inspired me a lot. I got to know how much our women police officers contribute to our security system which otherwise we don’t tend to realize. Both men and women tend to look down upon  women cops as those who are not strong enough. But the truth is, women officers are as good as male officers and at times, better.