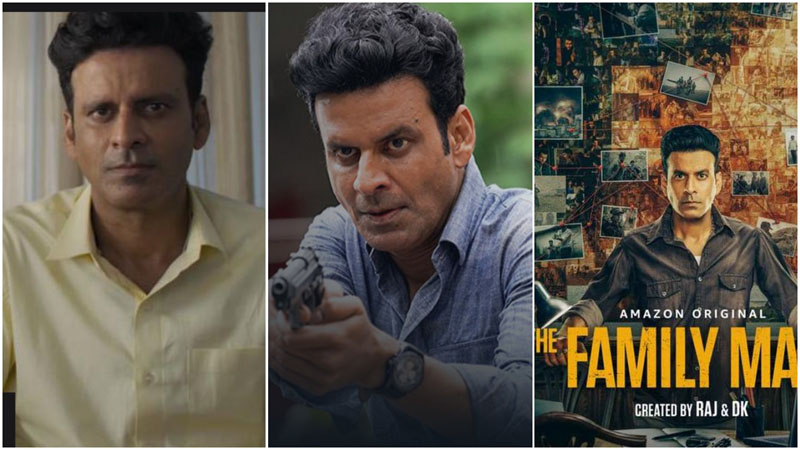 Manoj Bajpayee, with three National Awards in his kitty besides other awards, is happy with the thumping success of The Family Man 2. The versatile actor, who is also seen in Netflix's new Satyajit Ray inspired anthology Ray, in conversation with Shoma A. Chatterji

The Family Man 2 series has demanded much more physical action from you compared with the first one. How did you train yourself physically?

I didn’t particularly do any exhaustive physical training. But there were preparations, of course. I had taken notes as part of my mental preparation about a man facing conflicting emotions, like watching a fistful of sand in hand slowly trickling through his fingers. He is not happy with the job in hand but doesn’t know how to hold his family together either. He is emotionally troubled by the time he lands in Chennai.

What is your reaction to the thumping success of the new series?

In a word, it’s beyond anybody’s comprehension. It’s something you can’t plan for - it either happens or doesn’t. There is no in-between. Yes, we were expecting appreciation from the audience but we drew the line at it being around ten per cent less than the success of The Family Man 1. We were looking forward to breaking the jinx of the second season but we never expected this mammoth response.

How much research on the Tamil Eelam politics and terrorism did you need to do as a trained actor portraying Srikant?

The way an actor prepares for any role in a very personal thing because your directors cannot be with you all the time. I begin to make notes as if I am writing a long essay and keep going back to my notes all the time. I also read the script again and again to ponder on the differentials, especially the scenes I have to shoot with Vinod the next day till I come to a point which is completely in sync with the vision of the director. I begin this as soon as I read the script for the first time, then repeat the process to check if there’s any confusion. But all the preparation you do at home boils down to how you perform in front of the camera. We did as many rehearsals we were needed to and then did the  blocking  with the help of the directors.

How much of a director’s actor and how much of a trained actor did you need to be as Srikant?

Suman Kumar from Bengaluru was one of the main writers of the series. He has amazing knowledge about the geopolitics of the idea. He was my go-to person. Both Raj and DK, my directors, are completely in tune with what is happening around the world and we exchanged notes all the time about everything regarding the script. We discussed the issues from different perspectives so everything happened on the basis of their research and knowledge.

As an actor what differences do you find between acting in an OTT series and in a full-length feature film?

The only difference lies in the fact that for a series you know it doesn’t wrap up finally because it goes on and on and you can’t afford to forget about the character you are portraying. When you come back to it the next season it is also a long process and working in nine episodes is like working in three feature films. The homework, the research, the preparation is the same. The OTT gives more space and depth to explore every dimension of the character. So, it’s up to the actor to decide how to keep exploring the character he is playing. This fascinates me and gives me a new high. I love inventing , experimenting with and exploring the character I am playing.

As an actor, how do you manage to keep an objective distance from the character and the film/series?

Over the years, it has become rather easy for me to keep myself detached from the film/series I am a part of. As soon as we wrap up, I try to move on and start getting involved with the next project. I also spend time with the family at home before the next one begins. Earlier, it was a bit difficult but now it’s ok.

In what way has your career and life changed after the National Award?

Your life doesn’t change with an award but of course, a National Award carries a lot of prestige along with it. I won the National Award three times for three different films in three categories but they came after a long wait. I was expecting awards for Gangs of Wasseypur, Aligarh and Budhia Singh but though I won awards from other organisations, these films did not fetch me the National Award. But I am thrilled because I won it for my performance in Bhonsle which also fetched me the Best Actor Award from Asia-Pacific Awards both for the same performance which was really an achievement as Bhonsle is not a big budget film and has been directed by a new director Devashish Makhija. I know that all I had to do was to celebrate with the knowledge that I had to keep working harder.

How important is it for you to have a good rapport with your co-actors?

It is very important that I get friendly with my co-actors and collaborate with them on an equal footing. It’s only if I am on a comfort level with them that I can gather the confidence to act in front of everyone. So I make a real effort to strike a cordial relationship with my co-actors that goes to make a friendly atmosphere on the sets.

You recently said that you were getting closer to spiritualism. How would you explain this?

For me, spiritualism is very personal and private. Yes, I did say this but I am not passionately into spiritualism. I am deeply into meditation. One thing that gives me a high apart from acting is getting up early in the morning and then getting into meditation which was not a very regular thing for me earlier but I am aware that I am slowly getting addicted to it. Sometimes, I do it twice and I have found that it gives me a lot of happiness along with a sense of purpose.

Your success has been like a slow burn thriller that has brought you fame, affluence, a family and awards. How would you personally rank these in order of preference?

I don’t think about my profession in terms of affluence through the number of cars I can own or in the house I wish to live in. More important for me is that I  can  now choose the roles. This I consider to be in a great position to be in. I find myself having choices aplenty and then there are films I don’t even need to choose from. The rest of the things come along as perks that I welcome with open arms. Money is important- I don’t deny it, but for me, to have a choice in roles, films, banners, directors  is more important. I have that today.