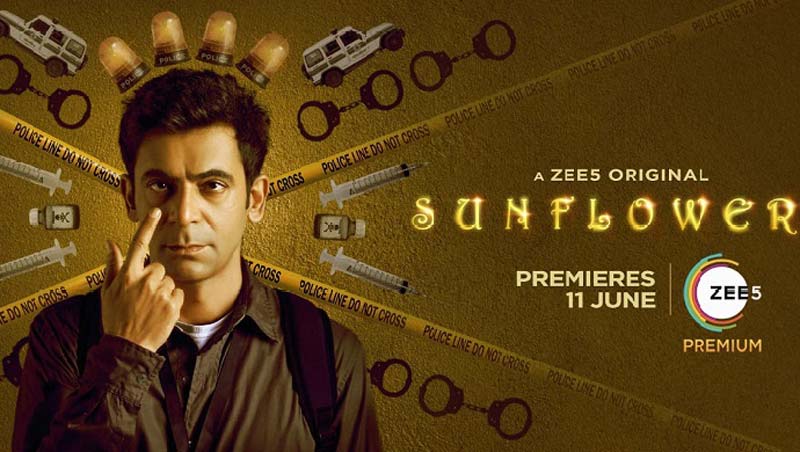 Sunflower: All You Need To Know About The Upcoming Crime Comedy On ZEE5

Sunil Grover’s upcoming crime comedy is set to release on ZEE5 on 11 June 2021 and there are so many reasons to be excited about it. The show is a quintessential murder mystery with a promising star cast and an intriguing storyline. It’s bound to keep you engaged till the end. For those who aren’t aware of the Sunflower web series, we have collated all the relevant information in one place:

Sunflower is the story of a middle-class housing society in Mumbai. A murder is committed in the society that leads to a police investigation. Sunil Grover plays the role of Sonu, who is a prime suspect in this murder case. He involuntarily gets involved in the murder mystery and whatever he does, it only makes it worse. Cops are highly suspicious of him and his antics don’t help him either. Residents are worried about themselves and the reputation of their society. Sonu, on the other hand, is not at all moved by all the happenings in the neighbourhood. This is ZEE5’s first ever crime comedy.

Sunil Grover is the protagonist of the show. Ranvir Shorey and Girish Kulkarni play the role of Police officers assigned to solve this case. In addition, the web series also features seasoned actors like Ashish Vidyarthi and Mukul Chadda. Ashish plays the role of a secretary and Mukul plays the role of the man who is murdered. ShonaliNagrani and Sonal Jha also play pivotal roles in this web show.

Besides these acclaimed actors, the show also introduces us to new faces like Ria Nalavade, and Dayana Erappa amongst others.The cast had a blast during shooting for this web series and their camaraderie will be evident in the episodes.

About Sunflower trailer and release date

Sunflower is helmed by Rahul Sengupta andit is directed by Vikas Bahl. Sunflower web series teaser was recently released online and gave usa sneak peek into this new murder mystery on ZEE5. The trailerintroduces us to different characters and builds a premise that looks interesting and compelling enough. The show is scheduled to release on June 11, 2021 on ZEE5.

Sunflower was amongst the first few projects that were shot after the lockdown was lifted in the country. The whole web series was shot when different states were easing up the lockdown restrictions. The unit followed all the safety instructions and worked with the minimum number of crew to avoid crowds and huge gatherings during the shoot. As per the team members, regular COVID-19 tests were carried by the production house to ensure a healthy and safe environment.

All About Vikas Bahl

Vikas Bahl, the director of the movie Queen, has co-directed this ZEE5 murder mystery with Rahul Sengupta. He also happens to be a national film award winner for the movie Queen. After helming Hrithik Roshan’s Super 30, this is his next immediate project. Earlier the director has produced enough content that’s available on the platform, but this series would mark his directorial debut on OTT.

Sunflower web series will exclusively release on ZEE5, subscribe with Rs. 499/- and get access to all the premium content across the platform ranging from popular TVShows, Original, Movies, Live TV, & latest News.