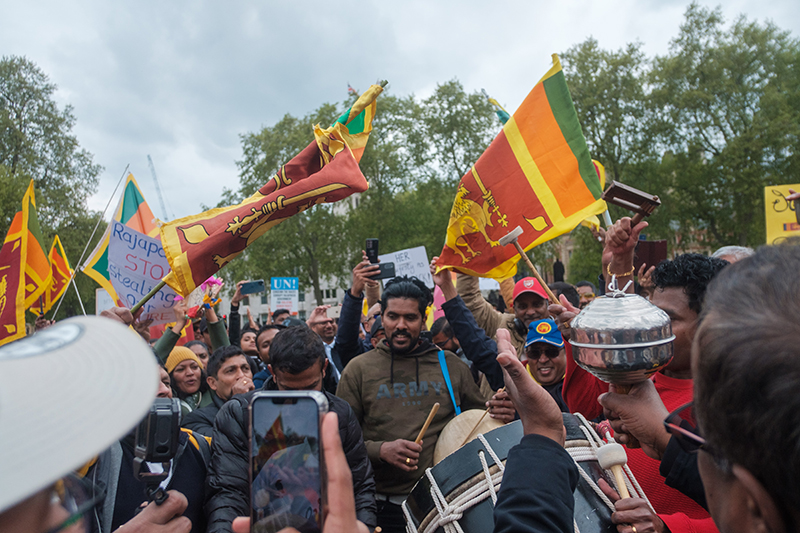 The political crisis started in the Island nation on October 26, 2018, by President Sirisena abruptly ousting Prime Minister Wickremesinghe and replacing him with Rajapaksa, is expected to continue for quite some time… Sri Lanka: Fueling Uncertainty, November 12, 2018.

On May 12, 2022, Ranil Wickremesinghe (73), leader of the United National Party (UNP) was sworn in as the new Prime Minister (PM) of Sri Lanka for the sixth time by President Gotabaya Rajapaksa, at President's House in Colombo. The newly sworn-in Prime Minister proceeded to the Walukarama Temple, Kollupitiya, to seek blessings and thereafter assumed his duties. Wickremesinghe was appointed following the resignation of Mahinda Rajapaksa, on May 9.

Significantly, on May 11, 2022, in a special address to the country, the embattled President Gotabaya Rajapaksa refused to step down and insisted that he would appoint a new Prime Minister and Cabinet within the week. He asserted that he would work with the new administration to empower Parliament and restore the 19th Amendment in a manner that gives more powers to the Parliament. He further claimed that he would abolish the executive presidency once the country stabilized, arguing,

The new Prime Minister will be given the opportunity to present a new program and take the country forward. At this critical juncture I request your support to continue the functioning of the state mechanism to protect the lives of the people and their property and to provide all the necessities for the people without allowing the country to collapse. Therefore, I earnestly urge all Sri Lankans to act peacefully and prudently at this juncture.

In the interim, Prime Minister Wickremesinghe declared that he had accepted his new position to save the nation from its present crisis:

I accepted the Prime Minister’s post to save the nation and to see that people of this country get three square meals while essential goods such as fuel, gas and electricity are available. I cannot do it alone and therefore I need international help. I also intend to obtain support of all MPs [Members of Parliament] in Parliament to save the nation.

Afterward, President Rajapaksa informed opposition Leader Sajith Premadasa of the Samagi Jana Balawegaya (SJB) that, as he had refused to accept any responsibility within an interim government under his Presidency, he could not change the decision to appoint Ranil Wickremesinghe as the Prime Minister at the present juncture. However, President Rajapaksa invited opposition Leader Premadasa to inform him, without delay, if the SJB was ready to accept Ministerial portfolios in the new Cabinet. He also stated that the appointment of the Cabinet could not be delayed further in a situation where the country was facing serious political and economic crises and asked Premadasa to convey his decision soon.

Significantly, on May 11, 2022, opposition Leader Premadasa had stated that his party was ready to form an interim government to bring about economic and political stability in Sri Lanka subjected to four conditions:

Respecting the will of the people, President Gotabaya Rajapaksa must agree to step down within a stipulated minimum period of time.
The President should not exert any undue influence on the all-party interim government to be formed for a short period of time.
Action will be taken to abolish the Executive Presidency in accordance with the existing provisions of the Constitution, within a very short period of time with all-party support.
After restoring the normal life of the people and establishing the rule of law, Parliamentary elections must be held quickly to give the citizens of Sri Lanka an opportunity to form a stable government.

On May 11, 2022, Defence Secretary General Kamal Gunaratne, during a special media briefing held at the Defence Ministry, Defence Headquarters Complex, Sri Jayawardenepura Kotte, stated that the death toll following the recent turmoil on May 9, 2022, had risen to nine, including two Police officers. A total of 219 persons were injured, 41 vehicles set on fire, 61 vehicles and 136 properties were damaged, he stated during the briefing.

According to a Sri Lanka Police Media Division release on May 10, 2022, eight persons had been killed in violent riots. Among the dead were a Member of Parliament (MP), a Pradeshiya Sabha Chairman, a Sub-Inspector of Police and a Police Sergeant. A person who was injured in a clash in Colombo succumbed to his injuries. A Sub-Inspector of Police died due to a tear gas canister exploding. Sri Lanka Podujana Peramuna (SLPP) MP Amarakeerthi Athukorala and his security guard were killed when his vehicle was surrounded by protesters in Nittambuwa, while a youth was shot dead by the MP. Two persons were killed and eight persons were injured in a shooting at a protest held near the residence of the Chairman of the Weeraketiya Pradeshiya Sabha. The Chairman of the Imaduwa Pradeshiya Sabha, A.V. Sarath Kumara succumbed to his injuries after he was attacked at his residence. Prominently, among the injured was Deshabandu Tennakoon, the Senior Deputy Inspector General of Police (SDIG) in charge of the Western Province, after he was assaulted by a group at Perahera Mawatha, Colombo.

A total of 136 properties were set ablaze, including the ancestral home of the Rajapaksas in Hambantota. Video footage showed the entire house of Prime Minister Mahinda Rajapaksa and his younger brother and President Gotabaya Rajapaksa in Medamulana in Hambantota city burning. Moreover, Mahinda Rajapaksa's House in Kurunegala was also set on fire by protesters, while a mob also destroyed the D.A. Rajapaksa Memorial – constructed in the memory of the father of Mahinda and Gotabaya – at Medamulana, Hambantota.

Indeed, on May 9, 2022, unprecedented violence erupted in Sri Lanka after supporters of former Prime Minister Mahinda Rajapaksa attacked peaceful anti-Government protesters who were demanding his ouster, blaming him for the country's worst economic crisis, even as acute shortages of staple food, fuel and power escalated.

Openly, on April 9, 2022, thousands of youths gathered at the Presidential Secretariat at Galle Face Green to demand the resignation of President Gotabaya Rajapaksa, Prime Minister Mahinda Rajapaksa, and the incumbent SLPP-led Government, protesting against the acute shortages of food, fuel and other essentials. Since then, large numbers of people have been protesting day and night in front of the Presidential Secretariat, the demarcated Demonstration Site, and in front of the Shangri-La Hotel in Colombo. The protestors’ main slogan was #GotaGoGama [ “Gota” is part of the President’s name and “Gama” means Village in Sinhala. Thus, the slogan read, "Gota Go Village," or “President Go Home”].

The protests which had been building up from late February in response to Sri Lanka’s worst economic crisis since its independence, turned into a nationwide uprising, demanding the resignation of President Gotabaya Rajapaksa and removal of the Rajapaksa family from politics.

Interestingly, the Rajapaksa brothers, immensely popular among Sri Lanka’s Sinhalese population because of their role in crushing Tamil separatists and ending a 26-year civil war in 2009, were elected as President and Prime Minister of the country. On November 18, 2019, SLPP candidate Gotabaya Rajapaksa (70) was sworn in as the eighth Executive President of Sri Lanka during a ceremony held at Ruwanweliseya in Anuradhapura, while Mahinda Rajapaksa became the Prime Minister on November 21, 2019.

According to an April 1, 2022, report, during their rule Sri Lanka also moved closer to China, borrowing almost USD 7 billion for infrastructure projects, many of which turned out to be white elephants, mired in corruption. A dire shortage of foreign currency, needed to pay Sri Lanka's debt, forced the Government to ban swathes of imports, causing severe shortages of essentials. Millions voted to elect a new President to lead the country out of its deepest economic slump in over 15 years after it was hit by a tourism slump in the wake of the Easter Sunday terror attacks of 2019 that killed 262 people, and then wrecked by the Covid-19 pandemic. In addition, economic mismanagement by the Rajapaksas was also to blame, including years of chronic budget deficits and ill-advised tax cuts. The recent crisis, caused in part by a lack of foreign currency, meant that the country could not pay for imports of staple foods and fuel, leading to acute shortages and exorbitant prices.

Meanwhile, on April 1, 2022, President Gotabaya Rajapaksa declared a nationwide State of Emergency amidst a spate of protests. He issued a special gazette notification late in the night of on April 1, 2022, declaring a public emergency in Sri Lanka with immediate effect, declaring,

Whereas I am of opinion that by reason of a public emergency in Sri Lanka it is expedient to do so in the interests of public security the protection of public order and the maintenance of supplies and services essential to the life of the community.

According to an April 6, 2022, report, as the ruling coalition appeared to have lost its majority in the 225 member Parliament with over 40 MPs declaring independence from the ruling coalition, President Gotabaya Rajapaksa late in the night of April 5, 2022, revoked the State of Emergency with immediate effect. The gazette notification declared that the President had withdrawn the Emergency Rule Ordinance which gave Security Forces (SFs) sweeping powers to curb any disturbance in the country. Significantly, the Emergency was imposed because of the mass scale protests planned for April 3, 2022, against the economic hardships faced by the people. Later, the Government imposed an island-wide curfew. However, protests continued despite the curfew and the State of Emergency, with senior ruling party figures having their homes surrounded by angry protesters who urged the Government for solutions to the economic crisis.

As protests continued the Sri Lanka Police shot dead one man identified as Chaminda Lakshan, and injured 10 others on April 19, 2022, in the first fatal clash with demonstrators protesting the island nation's crippling economic crisis. In a Tweet on April 20, 2022, President Gotabaya Rajapaksa declared,

Sri Lankan citizens’ right to peacefully protest won’t be hindered. @SL_PoliceMedia will carry out an impartial & transparent inquiry re the incident at Rambukkana which led to the tragedy for which I’m deeply saddened. I urge all citizens to refrain from violence as they protest.

According to an April 28, 2022, report, more than 100 trade unions, some affiliated to the Rajapaksas' ruling SLPP party, joined the general strike, as demands grew for President Gotabaya Rajapaksa and his family members to resign.

In the interim, on May 6, 2022, President Gotabaya Rajapaksa declared a State of Emergency effective midnight on May 6, 2022, for the second time in five weeks, giving SFs sweeping powers, as a nationwide strikes demanding his resignation brought the country to a standstill.

Succumbing to the pressure of the escalating protests, in a step that would enable his younger brother President Gotabaya Rajapaksa to go for a government of national unity, Mahinda Rajapaksa resigned from the post of Prime Minister on May 9, 2022. Taking to Twitter, Mahinda wrote, “Effective immediately I have tendered my resignation as Prime Minister to the President.” In his resignation letter, Mahinda stated,

I write to inform (you) that I have decided to resign from the post of prime minister with immediate effect. This is in line with your request made at the special cabinet meeting held on May 6, wherein you said that you intend to set up an all-party interim government.

The current eco-political crisis emerged as the ruling administration’s biggest political challenge, after President Rajapaksa’s thumping poll victory in 2019, and his party’s subsequent big win in the 2020 general elections. As the country faces economic collapse and little hope for the proximate revival of the critical tourism sector, amidst widespread disorders, it remains to be seen how the new Prime Minister Wickremesinghe will restore a measure of stability. The continuance of President Rajapakse at his post is also likely to be a red rag for an enraged public.