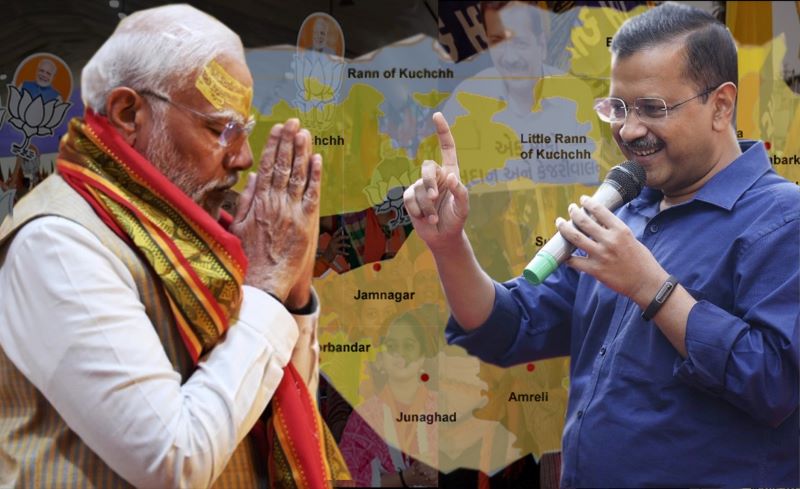 Modi Vs Kejriwal: Is Gujarat an AAP hurdle race for BJP in this election?

Unlike the 2017 assembly elections where Congress had almost at one stage flipped the government until BJP pulled things back, the saffron camp is facing an apparent organised and far-sighted opposition party this time in the form of Aam Aadmi Party (AAP).

With every passing week in the run up to the Dec 1 and 5 elections, the BJP and Prime Minister Modi are heard training guns at the AAP, which is widely viewed as a possible alternative to Congress in the nationwide opposition space.

While the ramifications of AAP's active mode can only be understood comprehensively on Dec 8 (counting day), questions are brewing on whether the BJP finds it more difficult to tackle Arvind Kejriwal's party than the beleaguered Congress.

Be it Arvind Kejriwal in Delhi or Mamata Banerjee in West Bengal or Nitish Kumar in Bihar, the Prime Minister with all its might fell short of his ground.

With Congress still taking time to adjust with its new chief Mallikarjun Kharge in all battles, Modi, who probably knows Gujarat like the palm of his hand, is facing an apparent opposition in the form of Kejriwal, both in the scales of rhetoric and campaigning.

With the state BJP changing its Chief Ministers at regular intervals following Modi's exit from the post in 2013-14, Kejriwal is aware of rooting to his stable leadership which did magic for AAP in Punjab earlier this year.

While Congress' top leader Rahul Gandhi is engaged with the BJP from his nationwide rally or Bharat Jodo Yatra on Savarkar debates, Kejriwal relaunched his Delhi politics model of talking of development.

Unlike Gandhi whose remarks often prompt BJP to call him "anti-Hindu", Kejriwal is a seeker of votes on development. 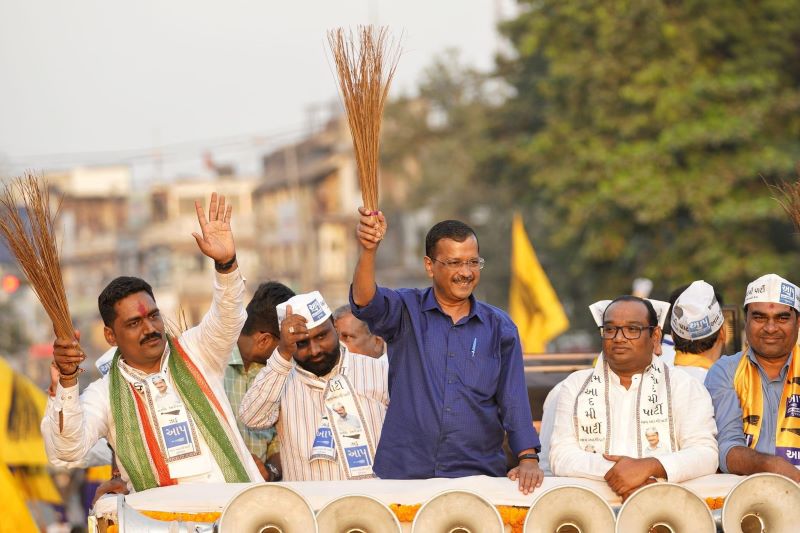 "I am an honest, educated person, an engineer. I don't know about politics and hooliganism. I only know how to make schools, hospitals, roads.

"If you want hooliganism, corruption and politics, then vote for them (BJP). But if you seek schools, hospitals, roads, electricity, water, then vote for me, I will do those," says Kejriwal from a mega rally in Gujarat.

Political analyst Praveen Rai, who works for Centre for the Study of Developing Societies (CSDS), says, "AAP seems to have an advantage, as other opposition parties including the Congress are either trapped in a self-created political crisis or stuck in cobwebs of confusion."

"Hum to fakir aadmi hoon, jhola lekein chal parenge ji (fakir implying a man with no attachment)," is an enough one-liner which always gives Modi an edge over Congress, which is riddled by the allegations of dynasty politics.

Modi's incessant attack on Congress over dynasty politics has never left Modi empty-handed ever since he actively joined the national politics in around 2013-14.

For Kejriwal, Modi needs to find an alternate route.

Modi is left with no option to use his "Shehzada (prince)" jibe against Kejriwal, who is a mechanical engineer from the prestigious IIT Kharagpur with no lineage in politics.

Unlike his apparent competitors in the run for national politics, Mamata Banerjee or Sharad Pawar, Kejriwal has no remote link with the Congress, whose style and brand of functioning has remained Modi's trump card to help BJP cross the bridge in electoral politics.

Unlike Rahul or Priyanka, Modi's "Congress-mukt Bharat" agenda is a stranger to Kejriwal or AAP, which was not born in Congress' womb.

For a vast majority of anti-Modi or anti-BJP votes, Kejriwal has somehow emerged as an alternative which is tough to be branded as pro to any community at a time the Opposition accuses the saffron camp of bypassing secularism to establish its Hindutva model.

While BJP's ideological leanings are up for a debate, Kejriwal shrewdly doesn't shy away from subtly establishing his connection with the majoritarians of the country, the Hindus. 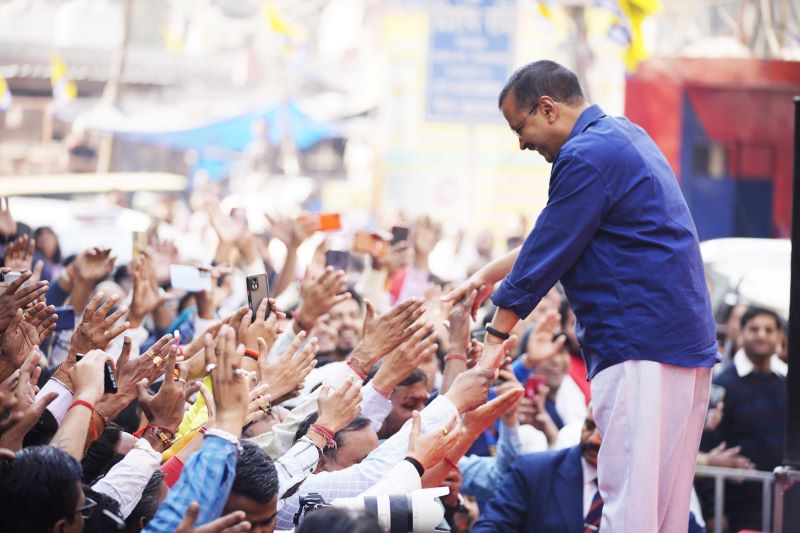 Gone are the days of reciting Hanuman Chalisa on television show during Delhi elections, now Kejriwal is demanding the Modi government to imprint the pictures of Lakshmi and Ganesha (Hindu God and Goddess) on the currency notes, of course alongside 'Bapu' or Father of the Nation Mahatma Gandhi.

Political analyst Praveen Rai says, "Kejriwal has been raising the Hindu identity card for electoral benefits and Gujarat seems to be becoming a laboratory for the AAP to churn out an alternative Hindutva model."

Clubbing his attack on the Modi government on its economic front along with Hindu sentiments undoubtedly makes Kejriwal an unfathomable enemy for the BJP, which is battling the 27-year anti-incumbency in Gujarat.

Rai adds, "The demand for including the pictures of goddess Lakshmi and Ganesh in currency notes is a good strategy for appropriating Hindu gods but it will not provide it the religious traction to capture majoritarian votes."