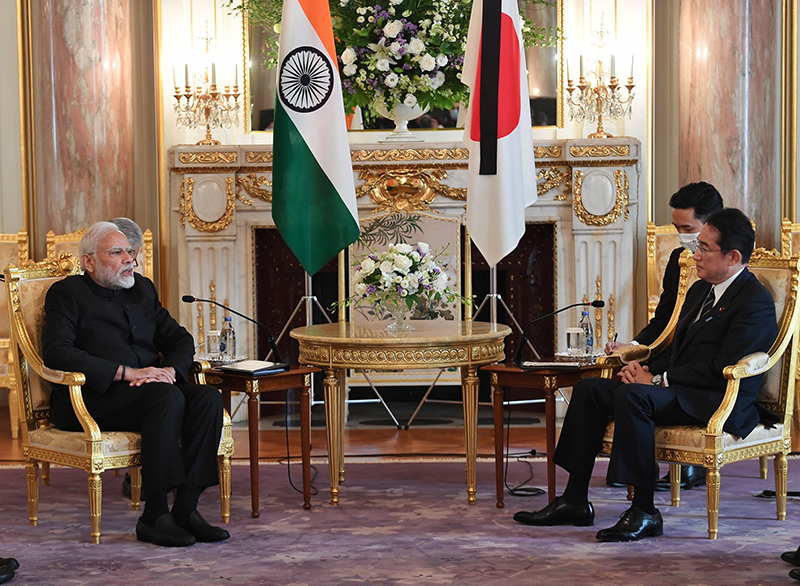 He conveyed his deepest condolences for the demise of Abe.

The Prime Minister noted the contributions of late Japan Prime Minister Abe in strengthening India-Japan partnership as well in conceptualizing the vision of a free, open and inclusive Indo-Pacific region, the Ministry of External Affairs said.

The two leaders had a productive exchange of views on further deepening bilateral relations. They also discussed a number of regional and global issues, the MEA added.

The MEA further said that the leaders renewed their commitment towards further strengthening the India-Japan Special Strategic and Global Partnership, and in working together in the region and in various international groupings and institutions.

Representatives from over 100 countries, including around 20 Heads of State or Heads of Government have come to Tokyo to participate in the State Funeral of Abe.

India had announced one-day national mourning on July 9 as a mark of respect for Abe Shinzo.

Prior to the departure of Prime Minister Modi to Japan, Foreign Secretary Vinay Kwatra said addressing a special briefing that Modi and Abe developed a personal bond through their meetings and interactions spanning over a decade, beginning from PM Modi’s visit to Japan in 2007 as Chief Minister of Gujarat.

The two leaders elevated India-Japan relations to the status of Special Strategic and Global Partnership in 2014, he said.

"PM Abe made significant contributions to deepening India-Japan relations, turning a largely economic relationship into a broad, comprehensive, and strategic partnership, making it pivotal for the two countries’ and region’s security.

"His famous Confluence of Two Seas speech in the Indian Parliament in 2007 laid the ground for the emergence of the Indo-Pacific region as a contemporary political, strategic, and economic reality," Kwatra said.

PM Abe’s contribution to India-Japan relations was recognized by the conferment upon him of the prestigious Padma Vibhushan in 2021.

This visit of Prime Minister Narendra Modi to Japan comes after PM Kishida’s visit to India for India-Japan Summit meeting in March, and Modi’s visit to Japan for the Quad Leaders’ Summit in May this year.

Both leaders also held a bilateral meeting on the sidelines of Quad Leaders’ Summit.

These meetings underscored the two leaders’ commitment towards deepening India-Japan ties, particularly in the context of shaping a post-pandemic regional and global order.

This year marks the 70th anniversary of India-Japan diplomatic relationship.

Japan is one of the most trusted and valued strategic partners of India.