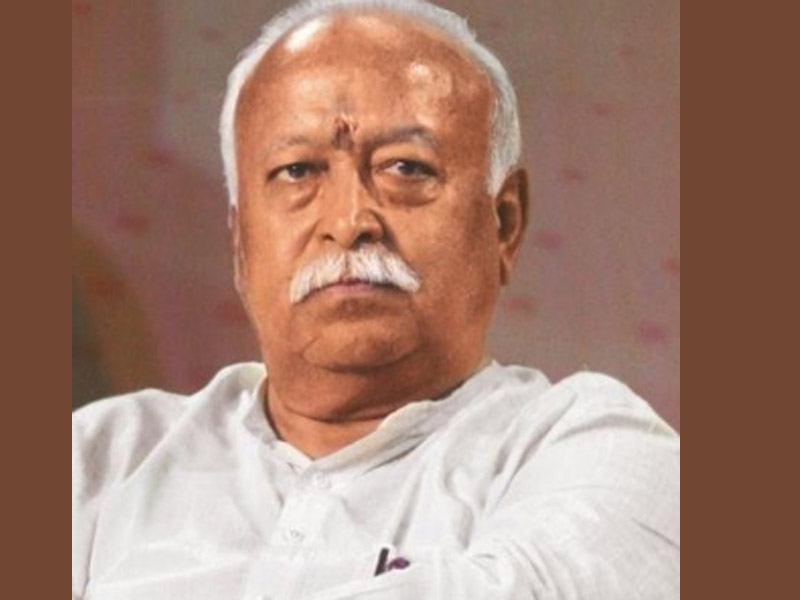 RSS chief Mohan Bhagwat visited a mosque in Delhi and also interacted with children studying in a madrasa as part of the outfit's outreach to the Muslim community, according to media reports.

Mohan Bhagwat met Umer Ahmed Ilyasi, the chief cleric of the All India Imam Organization, at a mosque in the heart of Delhi and held a "closed door meeting" that lasted more than an hour.

According to a national news agency, Illyasi called Bhagwat "rashtra pita", and added that "Our [Hindus' and Muslims']  DNA is same, only our method of worshipping god is different."

"It sends out a very good message to the country. We had discussions like a family. It was wonderful that they came on our invitation," said Suhaib Ilyasi, the cleric's son was quoted as saying in the media.

Umer Ahmed Ilyasi said Bhagwat visited Madrasa Tajweedul Quran in north Delhi at his invitation, according to the media reports.

Recently, Mohan Bhagwat met with Muslim intellectuals to try and "strengthen communal harmony", according to the organisation.

The RSS or Rashtriya Swayamsevak Sangh is considered as the ideological parent of the BJP.

On August 22, he met with five Muslim intellectuals. Former Chief Election Commissioner SY Quraishi, who was in the 75-minute meeting, according to NDTV.

During the meeting Bhagwat said he wasn't happy with the current atmosphere of disharmony in the country and that the nation could progress only with cooperation and cohesion, Quraishi said, according to NDTV.

Both sides discussed points of concern, he said.

Bhagwat raised the issue of cow slaughter which upsets Hindus. The Muslim intellectuals said it was practically banned across the country and anyone vioating it is a big mistake and there should be punishment, the report said.

The RSS chief also mentioned the use of the word "kafir" or non-believers, which elicited a bad feeling in Hindus.

The Muslim intellectuals explained that though the Arabic word simply meant non-believers, and was neutral in sense initially, had turned abusive. They told Bhagwat that they had no problem in stopping it.

The Muslim leaders told Bhagwat "that some right-wing people call Muslims jihadi and Pakistani" and are questioned the loyalty of Muslims and demad they prove their patriotism at every turn. Muslims are also Indians, they said.

The RSS chief agreed to these points and said Hindus and Muslims in India shared the same DNA, and most of the Muslims here were converts.

Indresh Kumar, one of the Sangh functionaries, said that Mohan Bhagwat asked the children what they studied and what they hoped to achieve in life. The children told the RSS chief that they want to become doctors and engineers, reported India Today.

Umer Ahmed Ilyasi informed Bhagwat that apart from religious education, the mosque was also making efforts to provide modern education for the students.

The students also chanted 'Madre Vatan' and 'Jai Hind' during interaction with the RSS chief.

Madrasa cleric Mehmud Hasan said Bhagwat was extremely cordial and apart from Islamic studies, that will help them in future, according to India Today.

He also heard the Quran and asked general knowledge questions to children related to the states and Union Territories of India during the visit that lasted for one hour.

He also gave away prizes to some students for their thorough rendition of the Quran.

Bhagwat stressed that modern education should also be part of madrasa education.

Later, he also visited Azad market and interacted with madrasa students there.--