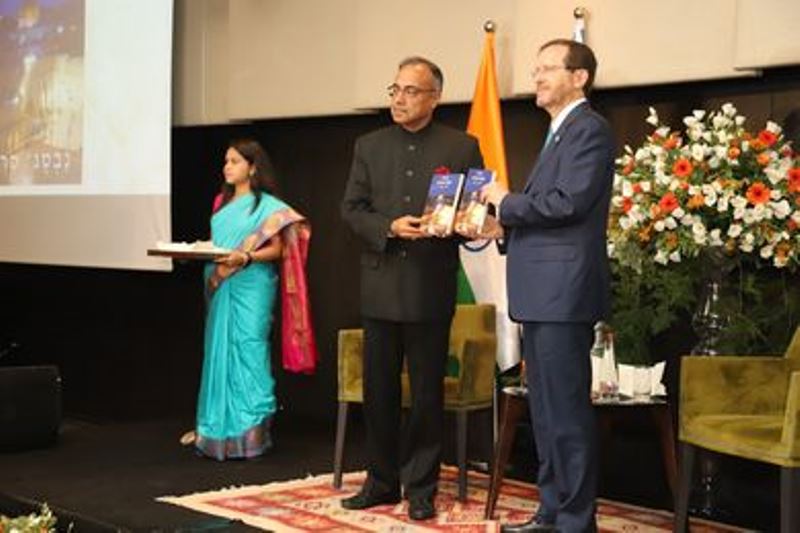 During the celebration, country's President Isaac Herzog delivered a keynote speech along with Prime Minister Yair Lapid, who sent a video message.

During his speech, Indian Ambassador to Israel Sanjeev Singla noted that Herzog's father oversaw the transformation of relations between the two nations.

"Today we are celebrating the 75th anniversary of India's independence and 30 years of full diplomatic relations between India and Israel. Mr. President, as we are aware, it was during the presidency of His Excellency Chaim Herzog that our bilateral diplomatic ties were upgraded to full ties," Singla was quoted as saying by Israel Hayom, touting India's longstanding embrace of its Jewish compatriots.

"Indeed, the civilizational bonds between India and Israel, enrich our contemporary understanding of the relations. Down through the centuries, the Jewish community has thrived in India, in harmony with other communities. And it is rare in Jewish history, that you had a long continuous period where you thrived and freedom and equality as you did in India. And I must say that we India's are proud of that. For several decades, the Indian diaspora – it's a word we learn from you – in Israel has remained a positive and industrious force supporting Israel and connecting our two countries," Singla said.

The Israeli president echoed the same sentiment in his speech, saying that in 2015, "I had the pleasure of greeting the first Indian President to visit the State of Israel President Pranab Mukherjee, and today as this truly joyous event, I'm honored to convey the warm blessings of the people of Israel and the people of India."

He noted that "in India's historical triumph, there are clear parallels to Israel's national story."

He added that "today, just a few decades later [from independence] we find the two modern nations proudly bound together by creativity and democracy by ingenuity, coupled with deep respect for timeless faith and belief systems, which transcend time. Israel and India both aim for equality and prosperity. We both face challenges internal and external. And we are both open to expanding partnerships by joining forces working together to maximize our strengths, whether in sciences or agriculture, high tech or green tech and so much more."

During the celebrations, Israeli President Isaac Herzog unveiled the Hebrew translation of the book ‘Indians at Herod’s Gate’, written by Ambassador Navtej Sarna.

In his video message, Prime Minister Lapid was quoted as saying by Israel Hayom, "India is a proud democracy rooted in deep history and tradition. It is also an innovation superpower changing the world for the better. That's why Israelis love India and the people. That's why tens of thousands of Israelis visit India each year."