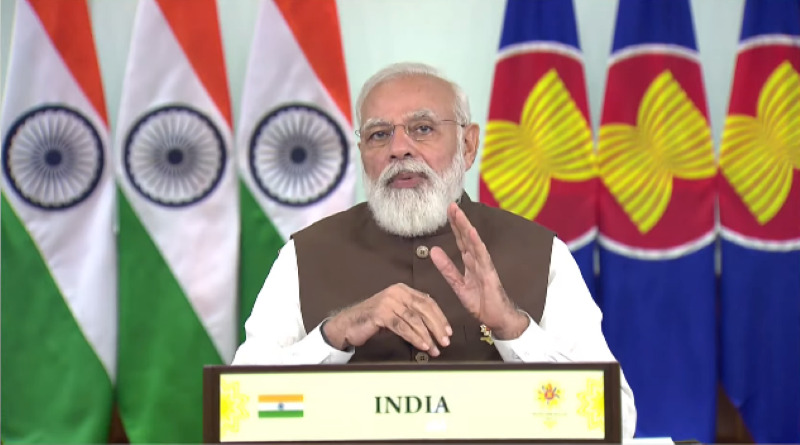 New Delhi/UNI: Prime Minister Narendra Modi Thursday stressed on the centrality of the ASEAN bloc in India’s Act East Policy and SAGAR initiative, and also emphasised on their shared vision of the Indo-Pacific region.

In his remarks at the 18th ASEAN-India Summit, Modi also stressed on the deep historical ties between India and the 10-member Association for South-East Asian Nations bloc.

He also said that he is very happy to note that both sides would be celebrating 2022 as the ASEAN-India Friendship year, with ASEAN and India completing 30 years of partnership, and with India completing 75 years of its independence.

In his speech, Modi said that the world had to face a lot of challenges due to the COVID-19 pandemic, but they were also a time when the cooperation and friendship between ASEAN and India were seen at their best, and the deep cooperation and goodwill between the two sides during the time has emerged as a bedrock for building on and strengthening their future ties.

“India and ASEAN share deep historical ties. This is visible in the similarity in our values, our culture, traditions, language and food habits. And that is why ASEAN’s unity and centrality has always remained of foremost importance for India,” he said.

“ASEAN’s central role is synced to India’s Act East Policy and our SAGAR initiative of Security and Growth for All in the Region,” he said.

He welcomed Cambodia as the new chair and Singapore and the coordinator and said India will work with both to deepen the ties.

Earlier, in his speech he said that this year they were unable to take the traditional family photo due to Covid, but both sides have kept the tradition of taking forward the ASEAN-India summits in the virtual mode.