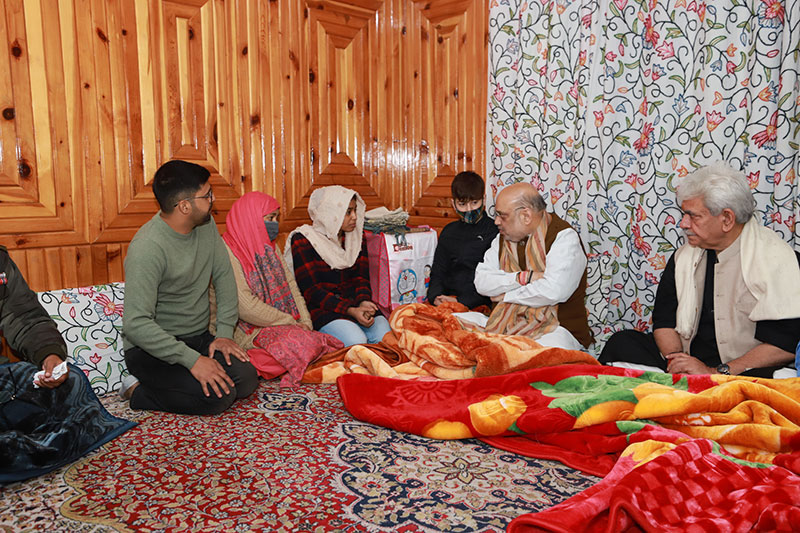 Srinagar/UNI: Union Home Minister Amit Shah on Saturday reviewed the security situation and asked security and intelligence agencies to work in tandem to give a final push to end militancy in Jammu and Kashmir, government sources said.

The security review meeting which was held at Raj Bhawan lasted for nearly five hours. The meeting was attended by the top brass of the country’s security apparatus including the Intelligence Chief, BSF chief, CRPF Director-General, J&K police chief and other senior officials.

These sources told UNI security forces and intelligence agencies were asked by the Union Minister to give a final push to end the militancy.

It is learnt that the Union Minister asked security officials many queries about the recent targeted killings of minorities and migrant workers.

A detailed briefing was also given to the HM about the recent killings, radicalisation, recruitment, infiltration and anti-militancy operations.

Interacting with members of Youth Clubs of Jammu and Kashmir in Srinagar. Watch live! https://t.co/4o61gl726T

Earlier, Amit Shah arrived in Srinagar on Saturday morning on a three-day visit to Jammu and Kashmir. This is his first visit after J&K’s special status was abrogated on August 5, 2019 . The visit comes at a time when there has been a series of targeted killings of minorities and migrant workers.

Soon after he landed in Srinagar, Shah visited the family of Jammu and Kashmir Police inspector Parvez Ahmad who was shot dead by militants in June this year.

Shah met his wife Fatima and handed over the order of government job. Parvez was posted in the CID wing of Jammu and Kashmir Police. On June 22, he was killed outside his house at Nowgam.

Security was beefed up across Kashmir ahead of Shah’s visit. In Srinagar, a security blanket has been thrown across the city to ensure that the visit of the minister passes off peacefully.

While patrolling and frisking have been intensified from the last few days, drones have also been pressed into service for aerial surveillance of the city. Additional deployment of forces has been made across the city. New bunkers have come up to keep a vigil in the vulnerable areas.

Security around the areas with minority populations has also increased. The sharpshooters have also been deployed at the vintage points in many parts of the city, police said on Saturday.